on June 17, 2013
Yesterday, David and I went to bugis, then Arab street for lunch (Blanco Court Prawn Noodle Soup yum!!!), then we popped over to China Town (Smith Street's roadside hawker food is no longer there!!) and finally we walked to boat quay for a drink (my toe got blister now).

Halfway through my drink at Boat Quay, I noticed an ex BF of mine seated at the table across from us. My first reaction was to just look and wait for him to look my way so I could smile and wave 'hi'.

But he didn't turn towards out table. Not sure if he had already noticed me earlier and so was purposely not looking my way... or if he perhaps just didn't see me.

So I just left it as it was.

We were only together a few months (probably 3 a most!) and I couldn't place him... like was he from when I was a teacher? Was he from 3 years ago? So I just scanned through my blog archive... turns out, he was the boyfriend I had just after Skye, and before Mark.

I was trying to recall stuff about him... why we broke up (I think he dumped me because he thought I was stupid and lacked depth   lol  ). Then I realised that I used to always date very selfish/self-centred men in the past.

Was never love. He was definitely concerned about how good or bad I made him look. Never really felt that he had my back ever.. it felt more like, if I were to struggle, he would leave me behind instead of helping me. I think I must have told you guys about this before.. but he was the guy who took me to meet his friends. There were 5 of us altogether that evening, 2 of them ended up sitting facing another 2, while I was the fifth one out facing nobody. The one beside me turned her back to me and was talking to the guy next to her. I strained to lean across and listen in to my BF and the guy next to him talking. But I was really struggling. Then at the end of the night, my BF told me off for not being social and making his friends feel uneasy. WTF.  He had his finer points... like he was very fit. But that's about it.

Then came Mark, who I believed loved me very much, and in my life, has been my longest and most serious relationship I've had... until I met my husband (I met my husband David exactly 2 years ago now, and we have been married almost 5 months).

But in the end, with Mark, old habits die hard, and this too, became a relationship of weighing what I could do for him. After mark and I broke up the first time.. and then got back together, our relationship was very very unbalanced. I was busting my back making him happy, pleasing him, doing what he wanted because it was honestly my fault our relationship failed the first time. But he became quite a shit person the second time round. For instance, he would go away on his golf weekend, and not call me at all. AT ALL. I didn't even text him, cos I didn't want to be the old clingy me. But then when he came back, and I learnt that the other guys on the trip all took multiple phone breaks to call their wives or GFs.. it made me so sad.. like hey why he didn't feel like I deserved any of that too? Anyway, after a couple of months, I just didn't feel that he loved me anymore. It was more like, he had me as a GF because I was doing all the giving and he was doing all the taking... and he wanted to see how much shit I would put up with. And that was finally the end of that epic relationship. 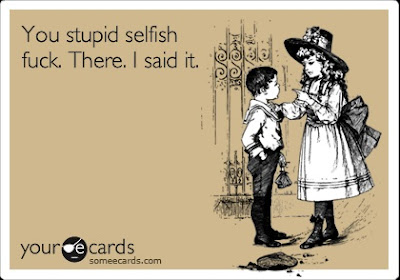 This selfish trend didn't stop with these 3 ex BFs, no...I had many many more similar type guys. Is this self-centredness just human nature? Have you seen any similarities in your exes?

I don't think any of these guys thought about me, or my happiness. I truly feel that the whole relationship was based on - "What can she give to me in this relationship?"

When my husband does something or he plans for the future (finances/investments and stuff), he always says- "I'm doing this for you, Holly" ... I  really should appreciate him a whole lot more... especially after looking back at all those selfish partners I had who acted solely in their own interests.

Anonymous said…
Hmm, well I guess there are all sorts of people in the world, some know how to justify themselves really well and we like to think we can see through the bullshit and into their intentions.

I don't think any of them were "bad" people per se, they just didn't see or chose not to see that their actions could be selfish because anyone can always come up with reasons to explain themselves and so they will never see themselves as the douchebag.

Maybe it might also be because you changed as a person too, maybe you're looking at life more positive and thus you see the good sides more. The benefit of retrospect could also be detrimental to a memory.

But as long as you're happy now everything and everyone else before kind of matters less, or not at all, right?
6:36 pm

Anonymous said…
talk more about how happy you are now? more future posts instead of ex bfs? would love to read more about your happy life now ^^ eg. your previous post about quirks that irritate you about each other
12:52 am

Anonymous said…
No offence intended, but the whole "I'm doing this for you, Holly" speech would make me feel uncomfortable. I would feel like I owe him something. But that's just my opinion.
10:51 am

Larzarus Yeno Paragon said…
In a way, I agree with the reader who said the "I'm doing this for you" speech would make me feel uncomfortable. It can be taken as if he's trying to point out that he's doing something for you and not himself when in fact, an investment into the financial future of your household is for the both of you. Granted, it's very nice of him to be doing this but pointing it out surely makes it seem like he's letting it be known that he is contributing to the relationship. I wonder if he thinks you aren't?
1:28 pm