Being Public About Love 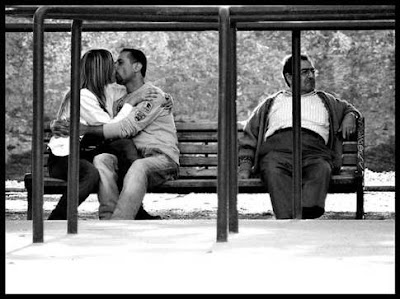 "GET A ROOM" people frequently say in disapproval whenever a couple starts kissing or being affectionate in public.

I love it when my BF calls me by pet names he has for me (so far... it's toots, holly pops, bambina and fatso junior). I love all of them. He doesn't use it in the presence of others (or at least, he uses it much less). I also try to address him by his proper name in public.. but I find that it's almost a reflex action to call my BF by his pet name (which... due to my lack of imagination is usually Darling, or fatso). If it slips out. it slips out. Life goes on.

But I don't understand why some people get very uptight about not using pet names in public. Does it hurt anyone? Of course not. If anything, I think it’s easier for people to stop eavesdropping on my conversation than it is for me to reword my vocabulary. It's ridiculous for people to feel uncomfortable over something sweet and harmless.

I like holding hands. I like kissing and being kissed. I like to cuddle. If I feel like giving my man a kiss, I’m going to do it. If I feel like putting my hand on his arse (over his jeans), I'll do just that. Why should the public feel uneasy or judgemental about it? I’m not groping you, so relax!

You know, in the shuttle bus in Glasgow airport, there was a couple standing in front of me, against the bus window (this airport shuttle has no seats.. only passengers and their luggage). Well, it was cold. And this couple were standing so close, he was embracing his girl. And they kept kissing. David and I, were both shit tired (we had a long transit in Dubai before this flight). And my huge suitcase was in between us... not cuddling or anything. I felt envious. of that couple. Jealous even. (But I did not scowl in disgust like some people might)

Then... I don't know if David felt the way I did, or if he's actually not neurotic like I am, and he truly just felt like it.. he pulled me in for a squeeze and kissed the top of my head before we got off the shuttle. It's the little displays of affection like this which I love.

So I can't understand why some people hate it. If seeing any physical expression of romance is offensive to you, I think it’s time to take your heart out of the freezer. Either that or just avert your eyes and look elsewhere. Couples shouldn’t feel stifled by public judgment.

There’s nothing gross about being in love.

Kuen said…
As long as it's non-sexual i dun see why people should be bothered by it. Unless they are loser wahaha.
9:30 pm

Anonymous said…
PDA is inconsiderate behaviour, especially around children. When you are a parent too, you will understand.
10:50 pm

girl with the vanilla cookie said…
Not ALL PDA is inconsiderate, and why shouldn't children become familiar with sweet gestures of affection, like kissing? How is kissing inconsiderate? Are you talking about an all-out shoving tongue down the other's throat while groping, or just sweet little pecks on the lips? Why wouldn't you kiss your husband/wife in front of your children?
9:48 am

J said…
There's a line that shud not be crossed. A quick peck on cheek, lips, forehead, hugging is ok. Long smooching, french kisses and groping is not. While being in love is wonderful and not gross, the intimate displays of affection between a couple should be kept out of public view. It's called public dignity and decorum.
12:32 pm

Lala said…
My boyfriend and I indulge in PDA. Who cares about what most people think - the public's so uptight about everything anyway in sg. I think as couple, we decide for ourselves what we want to do, not other people. :)
12:35 pm

CindY said…
I totally agree with you but my bf hates it. He is very down-to-earth, no monkey business esp PDA which will 'ruin' his image as a mature adult. I hates it! But I am living with it now and if 1 day it gets overboard to suit his 'decency', I will just drop it.
FYI, my parents still hold hands in the public and my dad kisses us n our mom in the public so how does making a parent change this thoughts? So long it is not like gross and you know fondling each other rude areas, I do not see a problem.
3:19 pm

Sezanne said…
There was once my friend told me that her bf felt uncomfortable with me and my bf having a peck while we were watching a movie, and requested for us to keep our PDA to ourselves. I went like , WTF??? I didnt give a damn and stop going out with them thereafter. He just didn't have the balls to handle it and I really pity the gf, coz I know she envies us! haha! Take that!
5:21 pm

And really tight hugs fine too.

But no taking clothes off. No putting hands under skirts or into blouses etc. That's too much imho.
11:48 pm

Anonymous said…
Personally I feel that there must be boundaries to everything in life - otherwise things may get out of hand, etc. etc. Likewise applies to PDA.

A kiss on the lips or cuddling is fine, but what irks me the most is when people make out or the girl puts her legs on her guy's thighs in public. What's she trying to prove, that this is her territory?

I wouldn't feel comfortable making out in public, and neither do I want to cause others the same discomfort. What's even worse is seeing ugly people shove their tongue into their significant other's mouth. It may seem shallow and discriminative of me, but let's be honest: it's just nasty and, IMO, inconsiderate. Nobody's saying they shouldn't be allowed to, just do it behind closed doors.

Would you make out in front of your parents? I wouldn't. Likewise applies with strangers.
4:29 am