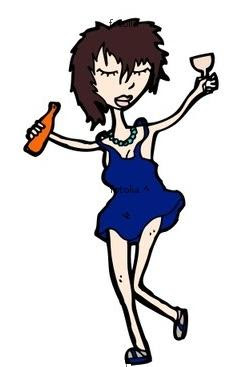 I have to admit (especially in my early 20s), I did a lot of things which I thought was so right and even CLEVER at that point but in retrospect... were so dumb.

Here's some of the dumbest things I have done in my 20s.

I don't know what it is about lying, but I just always did it. Not that the truth had to be hidden... but somehow keeping up with lies made life much more interesting. For instance, I would tell my then BF that I was going to my best friend F's house for the evening... but actually... we were headed out to the clubs. There's nothing wrong with clubbing. There's no need to lie about it. But I just did.

It was only in my mid 20s when I realised how lies can damage your credibility... and it's not worth the effort keeping up with a lie when you didn't have to lie in the first place!

2. Diving headfirst into a relationship

I still have the tendency to do this till today... but at least I knowingly try to exercise some restraint now. In my 20s I was all to happy to settle for the first person who checked all the boxes in my MAN checklist. But I've come to realise, unless you take the time to really get to know anyone (including yourself), and find out exactly what it is you want in a partner, you'll wind up in an unhappy relationship.

I'm fortunate that I haven't made any permanent commitments to anyone from my past. I now know they were all the wrong people for me.

I did not see that my age meant that I had not had the experience and exposure that my older counterparts had. There's so many things that happen till today that serve as a constant reminder that - I don't know shit about life.

Always be open to learning and experiencing new things.

4. The whole point of partying... was to get drunk

As young adults, my friends and I often drank our emotions through a big plastic funnel. Whether because of stress, boredom, insecurity or simply the thought that being high was cool, the twentysomething me got tanked far more often than I care to remember.

Now that I am thirty, I pace myself, and watch what I drink when I am out. There's nothing worse than blowing my whole weekend feeling hung over. Now that I am 30, I have also realised my body doesn't recover as quickly as when I was 20, and I now suffer what is commonly called the bloody 2 day hangover!

Also, I know now that being the drunk party girl with her skirt up in the air is not something to be proud of.

5. I put up with more shit than necessary

I could never say No. I still find saying NO difficult today, but at least with some effort, I can say No when I have to. Before, I would be obliging and miserable. So dumb.. I only had myself to blame for that!

Good riddance dumb 20s. I enjoyed you while you lasted... but you were really a dumb phase of my life. I'm sure though, that 10 years from now, I'll think my 30s were full of mistakes too! That's life! Love it!

Anonymous said…
If you've never been like that in your 20s, you'll never realize some of the things we wrong/not right. Sometimes i appreciate those people that had done wrong in the past and now a changed person, provided when i know the person, he/she is already a changed person.
12:26 am