Just To Hear The Whistle Blowing. (KL by Train)

on March 21, 2011
The old art deco style Singapore Railway station at Tanjong Pagar will cease operations in July this year (2011). This railway is a part of Singapore's heritage, and one of the few untouched old gems left in our country. 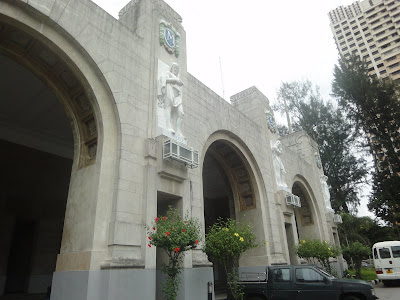 My boyfriend and I have never taken the train from this railway, so we decided to have a weekend getaway by train to KL. 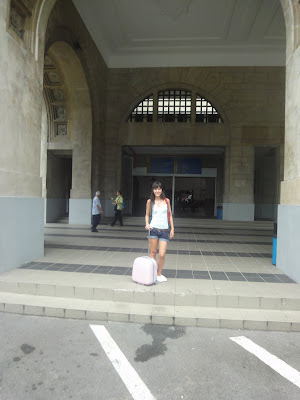 It is shockingly difficult to get tickets off the KTM website. I had to call in (Malaysia office) and book our tickets. They sell out very fast, especially if you want first class seats (premier) as there is only one cabin with these seats. I suggest booking at least 1 week ahead. 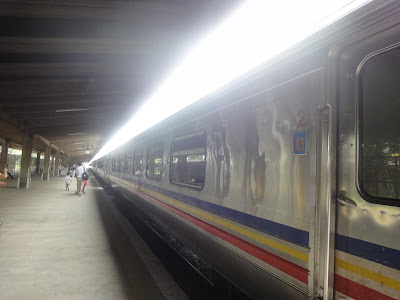 The train, expectedly, is an old one... looks like it's made of recycled tin cans... (but I love trains in general, including old trains!) 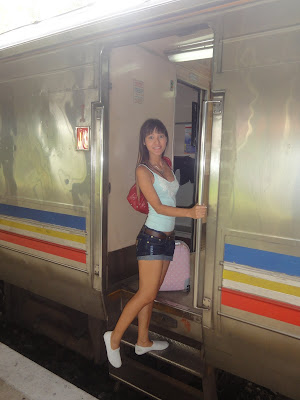 The interiors were very tired looking and (very slightly) musky smelling. But at least it was clean enough and I found my seat to be very comfortable and spacious for the 7 hour journey... 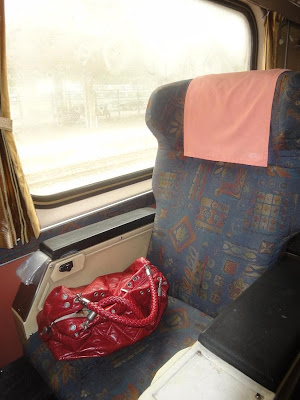 But I think KL is as far as I am willing to go on this train because of the toilets. I cannot go for more than 8 hours max without having to pee. My Bf went to pee and was surprised to find that the piss will just fall into a hole onto the tracks. Needless to say, one should NEVER use the toilet while the train has pulled into a station.
.
For 'first class', it was SG$68 per passenger, one way. If you purchase your ticket in Malaysia, it is 68ringgit. If you book economy seats.... I think it will be a hellish ride as the cabins are cramped, and seats are hard in those sections.
We could not get us return tickets (for Sunday) so we booked a bus/coach ride back (about SG$45 a person). 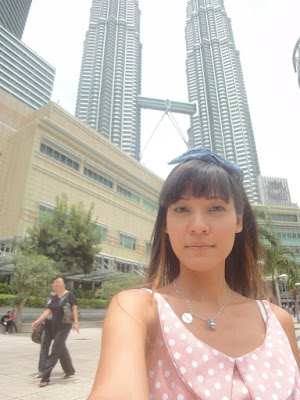 Although KLCC (City Centre) is where the Petronas Twin Towers are... I suggest only staying there if you need to (like for business). Otherwise, opt to stay at Bukit Bintang! 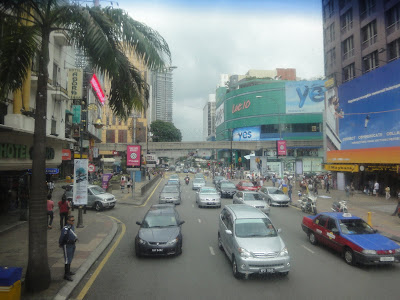 Bukit Bintang is a much more trendy and vibrant part of KL. At night there are plenty of bars and eateries open. In the day, there are so many shopping malls to go to like Pavillion, Lot 10, Farenheit. Plus attractions like Chinatown, Central Market and even malls like Berjaya Times Square are all within an easy walkable distance. 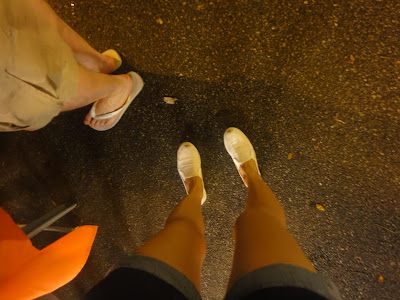 All you need are a pair of comfy shoes (that you don't mind dirtying). 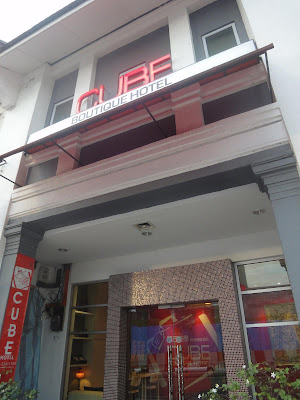 We stayed at the Cube Boutique Hotel. Nothing boutiquey about it really... at only SG$50 a night, you should not expect luxuries. But this place has a great location, and it's new and clean.
A few nights before this trip, I was talking to my friend N and her BF. Her BF laughed when he found out we had booked a $50 a night hotel in KL. Then he told me that the room will be so small that you can just get through the door to find your bed flanked by walls on 3 sides, and then... the one side of the bed which is not by the wall, will be inches away from the toilet. I laughed. 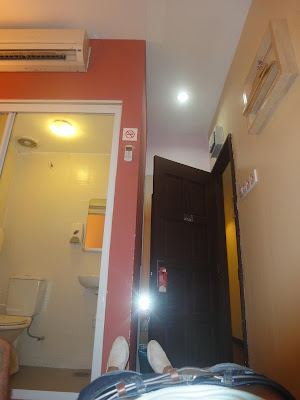 But when I finally checked in... I realised he wasn't exaggerating! Hahaaa.... :) 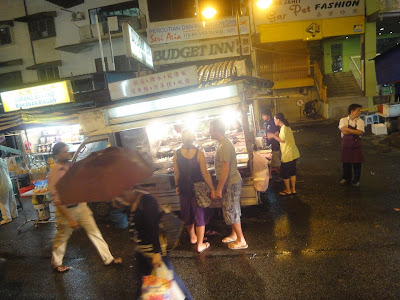 On Bukit Bintang there's a street called Jalan Alor. We ate here on the first night. Here you will find a whole row of chinese zhi ja places... duck... seafood.. everything. They even have mobile vans selling satay. 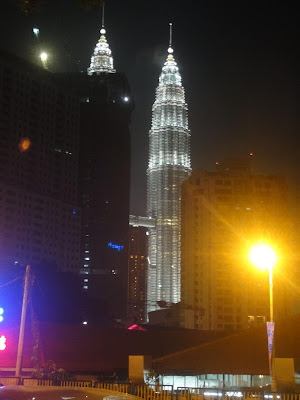 My favourite bit of this city is how it looks at night. In the day, you can see squalor, poverty, mud on your shoes and stagnant puddles of water on the streets. But at night, it transforms. 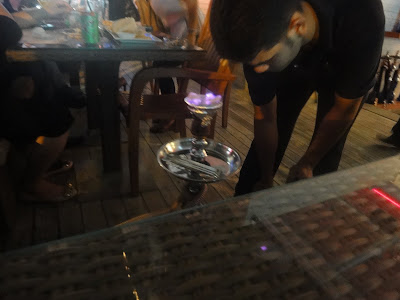 We tried chicha (sheesha?) at this alfresco place (I can't remember the name, but it's infront of farenheit mall). Arabic food across the street from this place... skewered lamb... pitas... hummus... and baclava.... all very very yummy. 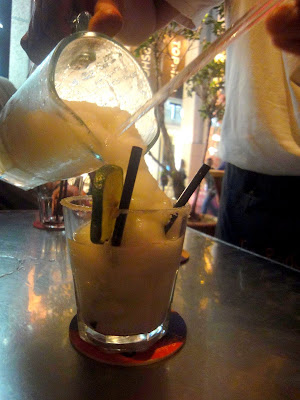 Then on another night, we had tapas and frozen Margaritas at a spanish restaurant Isa Bodega, just by Pavilion mall. The margaritas were good.. but the tapas were a waste of time.... not spanishy tasting in my opinion... I suppose there's a strong malaysian infusion into the flavours. But if I wanted that... I would eat something like Nasi Lemak, right?! 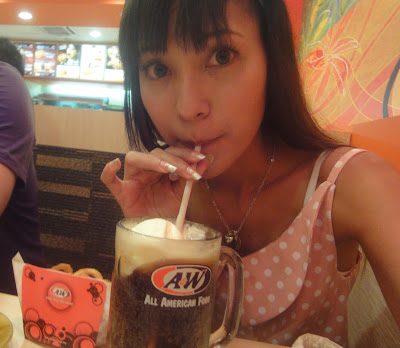 You will never run out of places to eat in KL. I had my A&W fix. 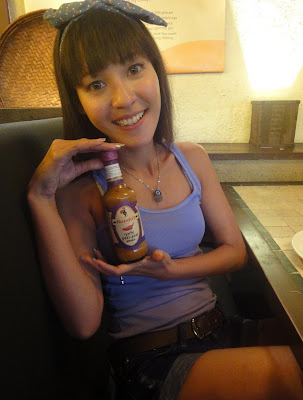 And Nando's fix as well. (Remember, I am on a mission to eat at a Nando's in every country they're at).
.
Took home a bottle of mild peri peri sauce as well. Might come in handy when I do a Spanish night for my BF this Tuesday. Will do my Gambas pil pil for sure, maybe paella, meatballs in sauce, chorizo and I will try to make Nando's chicken liver dish using this sauce.
I digress... 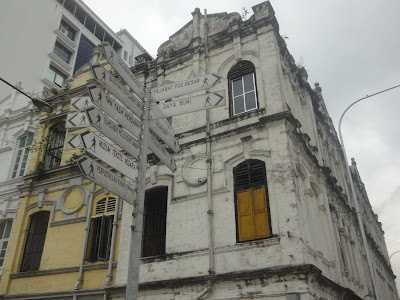 Walking is a great way to get to know a city. And KL has little pockets of interesting places throughout the city. 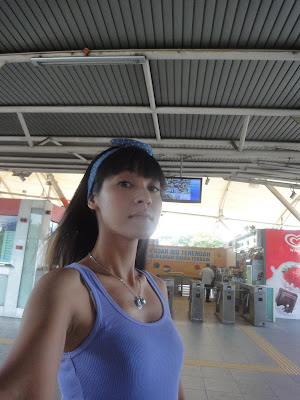 If you're not a fan of walking... the monrail will take you to most places you want to go to... and for dirt cheap. It can be faster than taxis when KL traffic is bad. 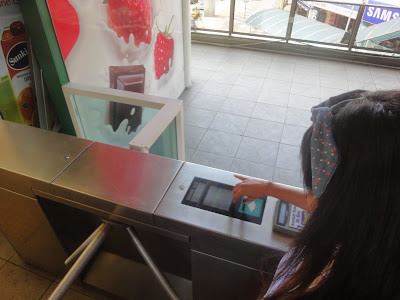 Taxis are MUCH cheaper than in Singapore. From KL Sentral (the railway station) to our hotel (Bukit Bintang) it was 13 ringgit. That's like SG$5! Try getting anywhere in a taxi from Changi Airport with $5... that's not even enough to board the taxi!
.
Another great way to see the city is via the KL Hop on Hop off bus. It's 38 ringgit for a 24 hour pass. The bus stops at major points of attraction in KL city ( like museums, the twin towers, Chinatown, Bukit Bintang etc). You can get off at any of their designated stops, and the next bus is scheduled at 30 minute intervals. 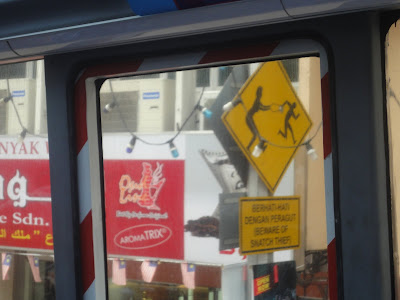 We got on this bus because it started to rain, so we just sat in air con comfort, toured the whole city, and got off at Bukit Bintang when the rain stopped. I snapped a pic of this sign as the bus went past it. Is it only in Malaysia where you get full on, galvanised metal type signs warning people of snatch theft?
Here's a quick run down of some of the other attractions we managed to check out during the weekend... 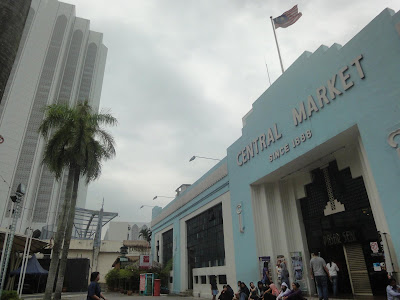 Cenrtral Market. Opens 10am to 10pm. It used to be an old wet market but has been refurbished to become an air conditioned market selling handicraft and batik and ethic stuff. This building is a heritage building... built all the was back in 1888. 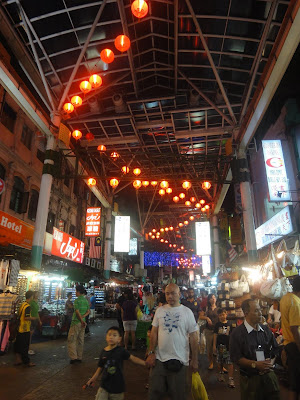 Chinatown, Petaling Street. It is much nicer now than it was (about) 8 years ago. Last time I was in Petaling Street, I was with my best friend Farizan. The hawkers were very uncouth and cut throat.... we got ripped off buying LV monogram murakami bags and other fake shit. But we never used any of it. Hahaaa... don't know what got in to us.
.
Now, it more of a buyers market. All the shops selling similar goods so you can easily haggle down to a good price (name your price) and then walk away. Often enough, they will call you back and give it to you at the price you named. Even if you don't want to buy any fake stuff, you should still check this place out. 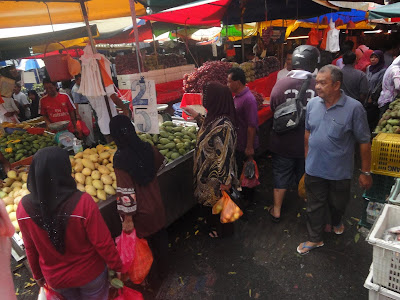 Chow Kit Market. We got to Chow Kit via monorail one morning.. since it was listed as an "attraction" in KL. I suppose seeing locals plough through a wet market buying their fruit, fish and veg for the week.... can be somewhat interesting for you if you're from.... Mars. 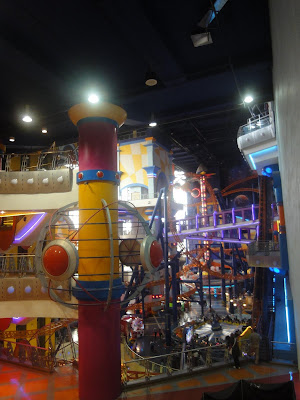 Theme Park in Berjaya Times Square. It's the biggest indoor theme park in the world. We didn't go into the theme park... we were at Times Square to get to our coach/bus (back to Singapore). But from what I saw.. the one big roller coaster which weaves and meanders through this whole theme park seems worth a ride.
.
And that pretty much sums up my weekend! :) I won't be returning to KL anytime soon. Or if I do, then my BF will have to drive. The coach ride back was horrendously long (left Times Square about 3pm.. only got to Singapore at 10pm... wtf man... everyone keeps saying it takes just 5 hours?!). The train was about an hour longer but much more comfortable and enjoyable.

Kuen said…
The highlight must be the A&W :D
Does the Nandos there taste any different? I remember the one down under had very juicy chicken
5:36 am

Have to clarify there, the mobile van that you sighted at Jalan Alor is not selling satay. in fact, it sells "lok-lok".... skewered food that you dipped into the boiling soup and eaten with sauces.

anyway, glad that you drop by KL for a visit. Btw, the bus journeys usu. take max 5 hours. Not more than that.It is indeed true.

If there is a next time, try Aeroline bus company. It is only RM70 one way from KL, and SGD70 from Sin picking up at Harbourfront and stopping nearby KLCC. It comes with a decent meal too.
12:39 pm

I think you were lucky that u didn't take a train ride back, cuz i took the train from JB back to S'pore (for the experience) just weeks ago, the train got delayed for 3hrs+! And worse is, no one bothered to inform us about an approx time to when the train would arrive! So we just waited and waited at the train station for the whole of 3hrs+!

Anyway, did you come across a plot of land near Choa Chu Kang where a household really plants rows and rows of vegetables on the small plot of land they have at the back of their hut? So kampong-ish and interesting to see this in Singapore. But its sad to know that all these may be gone when Singapore takes over the land in July. =(
1:29 am

Anonymous said…
There's poverty in every country, in case you are oblivious, missus.

Btw, KL has more than Bukit Bintang and Pavilion for tourists' visiting, so perhaps, when you try to give recommendations, do some home research first. Like, have you heard of 1U mall? The curve?
10:23 am

Holly Jean said…
@anon1.29 - omg. 3 hr delay. how shitty. I had another reader who emailed to say tht her train was delayed (while she was already on it), for an hour at some station.... cos the aircon broke down and it was being repaired.

I never said KL was the only country with poverty or anything like tht. I just said I prefer it at night, the city transforms... and one of the things tht become less apparent (to me) in the night is poverty.

The Curve? 1Umall? no never heard of them. Not interested either.

This is a blog post sharing my experience of KL with my readers. This is my lifestyle blog, not Discovery Travel & Living cable channel. You must have gotten confused.
10:34 am

~Zhenna~ said…
Babe, i never been to KL b4 and always thought is a 4-hour journey...

I really admire your spending habits. *Applause* U would definitely make a good wifey material :P

I thought the other day to my partner about a simple KL trip but stay at Palace of the Golden Horse (as recommended by some frenz) haha
He *faintz* when he saw the room rates lol
2:45 pm