on January 08, 2011
Finally, after 20 days, GB is back in Singapore. :) He flew home on Wednesday evening, the day before his birthday. 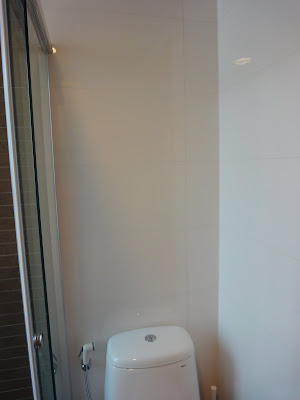 While he was gone, I did a mural on his bathroom wall. I have my own bathroom (in the masterbedroom) at GB's place, with all my make up and soaps and girly stuff... it smells of Lavender, the towels match, the sink is sparkling.

But GB's bathroom (which is by the living room) in his house is plain. When he moved in, just a couple months ago, I made sure to keep his bathroom simple because he's a no frills kind of guy. So it has blue towels, a blue rug, a clear stand for his toothbrush and stuff, and one small green fake (but very good looking!) potted plant by the sink. 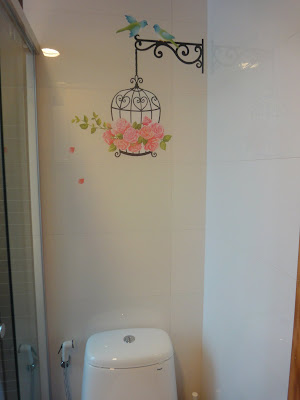 But while he was gone, I took the liberty of making it a bit less sterile. I was quite happy with my effort.. until I showed a guy friend a pic of what I had been up to. And he swore that GB would be super pissed off with me when he got back home.
That worried me for a bit.. but, blah to my friend, GB actually thinks it's nice. Phew! (It also makes me happy that he appreciates such gestures). 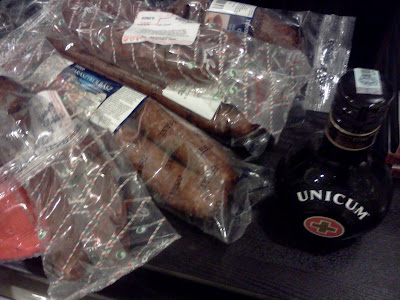 He brought my favourite Kolbasz (sausages) back!!! My cousine Olivia actually SMSed me the next day asking- "So what did GB get you?" ... and I said "Sausages :) "
I know receiving sausages from a boyfriend after he's been away 20 days, over Christmas and New Years would be mortifying for some girls. haha.. but somehow, I was very happy, because he knows what I like.
His best friend Robi, and Robi's wife Manyi gave me an awesome present for Christmas! One is a bottle of Unicum... it's the hungarian version of the jeigermeister. 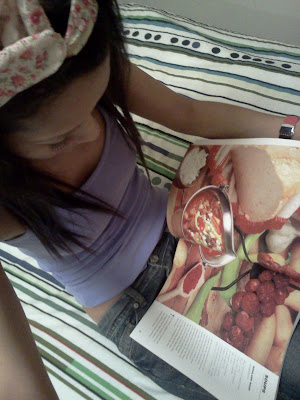 And the other is a cook book with traditional Hungarian recipes! SUPER YAYYYY!!!! I could not believe my eyes when I peeled open the wrapper! It is such a thoughtful gift! I love to cook and try out recipes, and I want so much to learn more about GB's culture. What better way than with food! 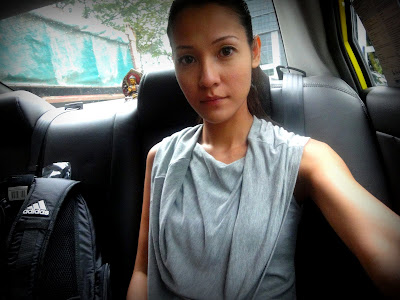 Then the next day (Thursday) GB went straight back to work on his Birthday (despite jet lag!). I went to lunch with peeps from H&K to talk about the upcoming HSBC Women's Champions golf tournament. In Jan and Feb this year, I will be bringing you updates on this event and also giveaway tickets to watch the tournament at Tanah Merah Country Club. Stay tuned for all that.
The grey dress that I wore is from thestylehunter's latest collection. I love the drape neckline that can be worn in a few other ways as well. 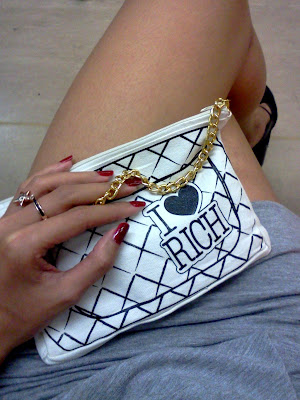 And I used my cute little bag from MillyWalker. It is soo super duper cute. It's meant to be carried as a wristlet... but I usually clip the straps on each end of the bag and carry it like a handbag.
After that I went to Spotlight at Plaza Singapura to buy white satin and some other materials because I am going to make a cupid costume for myself for the Valentine's Day party. I will tell you more details soon on how you can get invited, and also how you can win V'day Dinners at OOSH!!!! For now, details are still being finalised, so nothing is concrete yet. Hope I get your support for this event :)
Maybe next week, if I am not too busy, I will shoot a video on how to make a cupid costume. 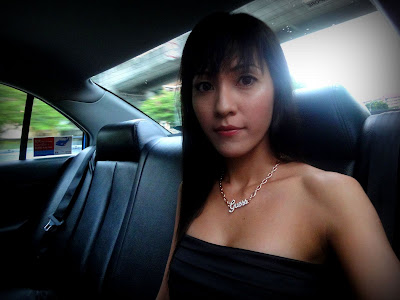 And finally, evening came, and it was time to meet GB for his Birthday dinner. I wore my little black tiered dress from SoHaute.cc . It's such a sexy short tube dress, has built in padding and a belted waist. 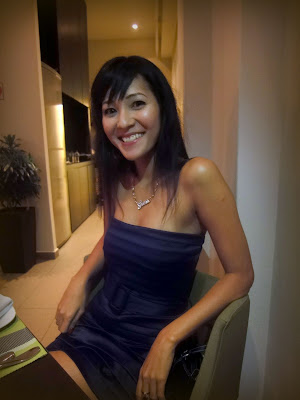 I made reservations at Table66, following a recommendation from my friend Bessie. It's run by Chef Vincent, the former executive chef of Desire @ The Scarlet Hotel.
When I first stepped in, I must say, I was a bit disappointed because the restaurant had no windows at all. It's in an old shophouse building. But I've dined at many restaurants in old shophouses... and usually the seating is in the front half of the shophouse, where you can see the door, and the front windows.
But Table66's cashier/reception desk was in the front bit of the shophouse, and then the dining area is partitioned off, behind the reception area. So you don't see anything but walls. Very distressing for me... not sure if other people ever felt that way about this place. 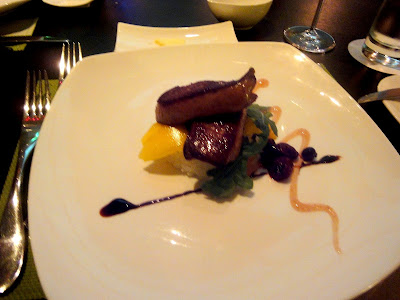 But once the food came, I was in heaven. Actually, while we were looking at the menu deciding what to order, GB was already salivating and I was so enthralled by what they had, that I had forgotten about the claustrophobic nature of the set up. We both started with the same thing.. pan seared foie gras.
Ohhhhhhhhhhhhhhhhhhhhhhhhhhhhhhhhh!

Heaven on a plate! I felt like smearing it on my lips so that the taste would linger (much like fruity lipglosses do.. but who cares about sickly sweet strawberry gloss when you can have foie gras tasting lips!) 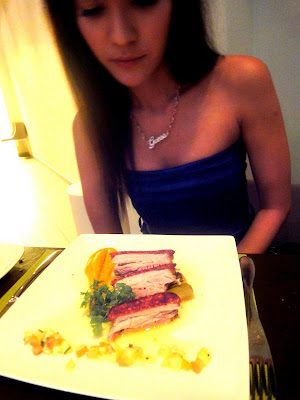 For the main, I had Pork Belly with crackled skin. Was ok, not bad. To be fair, nothing will ever taste as good as foie gras to me. I think next time we do fine dining, I will skip the main (like I used to always do in the past), just order my appetiser and the a dessert. Suits me much better that way. 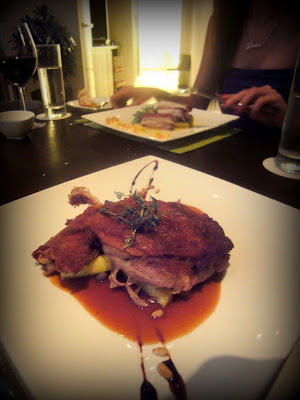 GB had the duck confit. It seemed tasty. 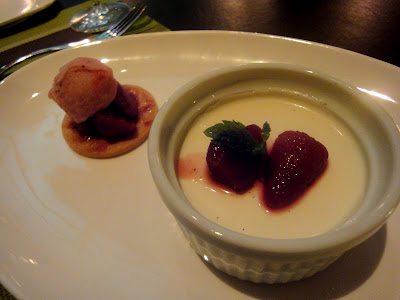 Then we shared a Lavender infused Pana Cotta. No creme brulee on the menu, so pana cotta is my second choice. Well... to be honest, I prefer just plain old Vanilla tasting desserts. The lavender infusion on this dessert was so strong, it made me feel like I was eating my bathroom air freshner gel. GB thought it was nice though... so maybe it's just me.
.
I brought GB out that night because I wanted to give him a nice brthday treat. But in the end he insisted on paying the bill. So in return, I sucked his cock in the car on the way home. :D
(The last part I was just-KIDDING lah !!!)

Anonymous said…
Oh no... That thing you do to his bathroom, HJ, it's HORRIBLE. He's probably just being nice by saying that he likes it. Seriously, why do you think you two have separate bathrooms in the first place? Because he doesn't want to have a girlie one!! And you intruded his personal space by doing what you think of as a sweet thing, but as your friend rightly pointed out, no guy on earth will ever like it.

I don't know whether it's a good thing or not that he's trying to not hurt your feelings and say nice things to you. Having been a long time reader of yours, I really hope what I'm saying isn't right... but seriously, HJ, I just think GB is not that into you.

Royce chocolate for Christmas and sausages after being 20 days apart... Don't you think he can do a lot better than this?
11:40 pm

merrymary said…
HAHAHA I just had to comment cos I absolutely died at the last line. Always a joker babe.

And you looked real chio in the dress for GB's dinner :)

Rosanna said…
Oh my Gosh Holly, that little bag was a free gift that came with the Japanese ViVi magazine issue 05/10 :O...
5:54 am

(Which started out difficult for me.. cos i have been used to guys pandering to me in the past.. but now I am used to it, hv learnt to be a bit less sensitive)

If he says it's nice, tht means he thinks ir. I wouldn't say he is tactless, but he wont beat around bushes just to be polite about something...

P/s- i actually like my chocs for xmas... and i was very touched, because he never buys anything for gfs/family/friends usually.

Even the presents which we gave to his friends kids back in Hungary, were all done by me. He's never given them pressies in the past.

D said…
Haha if I were you cousin, I'd have construed that to have a double meaning.
I'm filthy that way.
12:43 pm

Anonymous said…
Love that mural! Where did you buy that Holly?
2:49 pm

Anonymous said…
I like that mural! I'm a guy and i love it! Beats hanging an underwear there.
3:18 pm

eggtOfU said…
I love the mural Holly, may I know where you bought it or did you paint it yourself?
9:12 pm

Holly Jean said…
It comes in a big sticker sheet. (it's especially for walls).

Then u stick it in parts. Like u can choose where to paste the leaves, petals, birds etc.

There are other designs too. I did not get mine in SG, but I did see similar stuff at Plaza Sing, basement.

Can also check home deco shops... around the aisle where they sell stick on designs for bathroom/kitchen tiles.
9:31 pm

Anonymous said…
I know you wrote the last line as a 'joke' but why did you have to do that? It's just crude and cheapens the entire post. Just my thoughts - no offence intended.
2:14 pm

Jay said…
AGREES ABOUT THE LAST LINE. it's not so much tongue-in-cheek as it is crude and almost disgusting...

however, i dont agree with the second comment... to Anonymous: MIND YOUR OWN BUSINESS.
one man's junk is another man's treasure and to be honest... i love receiving food as gifts!
5:04 pm

Anonymous said…
Perhaps she did do it and it's a double joke pretending it's a pretence? That'd be cheeky, haha, and perhaps rather sexy if he'd suggested it.
7:53 am

Anonymous said…
pretence or no pretence no need to blog about it.
9:04 am

Holly Jean said…
It was meant to be funny. Like after reading the whole post, the last line makes ur eyes pop for a while, because u dont expect it, and the tone is so diff frm the rest of the post.

and then u realise i was kidding.

it made some people laugh. but i cant please everyone. no apologies for tht... am no Merlin.
9:53 am

Anonymous said…
touching his bathroom is so wrong. it's totally in line with the 'gf that hasn't shift in but does stuff that marks her territory' syndrome. too obvious.

totally channeling 'how to lose a guy in 10 days'. remember what kate hudson did?

of course he won't tell u it's not nice. but honestly, it's not even your bathroom, you can keep it clean and stocked of toiletries. but a freaking stencil of birdcage and flowers?
8:00 pm