Man it took us a while to get here (altogether 26hours to get to Budapest from Singapore!) 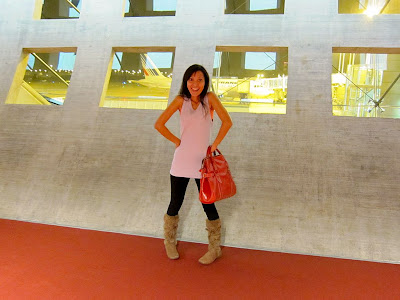 The first Leg via Air France from Singapore to France was fabulous as far as long haul flights go. Service was good, the flight was on time plus it reached Charles de Gaulle airport in Paris at least an hour ahead of schedule.

Slept almost throughout the whole flight. Was very comfy in my Uniqlo tights, cotton on men's singlet worn as a dress, my boots were from a post winter sale in Australia (paid like 20plus Aussie dollars!), and my bag is from ClubCouture. 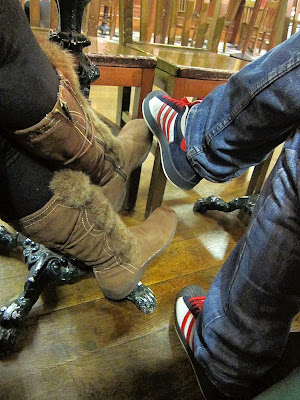 When we got to France, we had 6 hours to kill... we had books, magazines, laptops.. but we spent most of our time sitting at the airport bar drinking and eating. 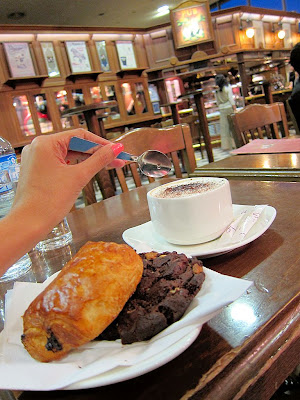 The cookie was EXTREMELY yummy. Everything else from that point on, was force fed to me by GB who seems to think that I don't eat much because I am afraid of getting fat. And he thinks my eating habits are unhealthy and I will get stomach problems. 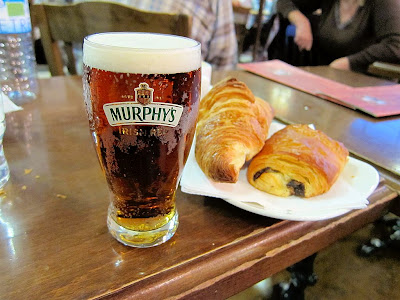 I just don't like Carbs! It's not because I am afraid of fats, in fact I love fatty food (like chicken skin and foie gras)... but I just don't like the taste of carbs, so I find it a waste to eat something I don't like. 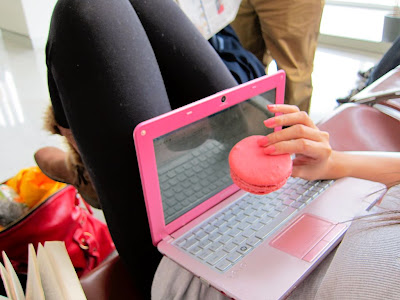 Well, anyway, you got to give it to the man for his persistence. He even bought me pink coloured stuff ... just to make sure I eat. " Matches your laptop, Honey," he said. (I'm a lucky girl) 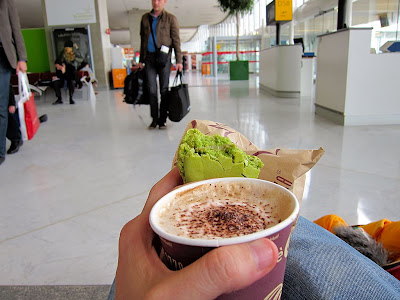 After the first leg though, the second leg was hellish. Malev (that's a Hungarian airline) made us wait another 2 hours (total wait was 8hrs plus!)... GOD. it's the waiting that really took it out of us. I don't know how many coffees GB had... many. (I don't drink coffee/tea btw) 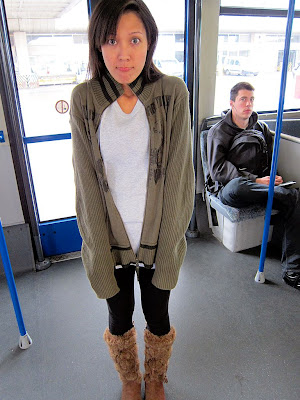 In the airport bus... using GB's jacket... and also slightly worried, because the temperature in France was 25 degrees... and already I was cold.

Well.. anyway... we made it. :) Now in Hungary, we had dinner, and then went to bed early because we were so tired. Today is a much better day, I woke up feeling fresh and rested. GB is down with a cold though (poor baby). I will take pics of Hungary soon.

Oh.. I want to tell you something else.

This morning, at like 4 am (which is like 1pm singapore time), GB woke up feeling hungry. So he prepared a sandwich and gave me half. Of course I protested... and he forced me to eat the half. I took a couple of bites, then gave my half back to him. (I wasn't even hungry lah!).

"Honey, I'm only forcing you to eat because of Love."

And then he joked a few seconds after popping that line... " and when I beat you, it's because of love."

(He was joking about the beating, ok)

Great. The first time my BF uses the "L" word around me, was when he was trying to force carbs down my throat... and then he associated it with domestic violence as well. Haha. Sobering. :)

I'm going to disregard that. As far as I am concerned, the "L" word hasn't been used yet. It's got to be a magical moment. (yes, I know what you're thinking, well... Bite Me!)

Anyway, I'm sat on the sofa writing this on my laptop... and GB heard me cough (it's because you force fed me too much yuck dry bread GB! I have eaten more carbos in the last 30 hours than I have for like the whole of this year!)

Anyway, bear in mind that he's the one that's under the weather and sniffling. I only coughed ONCE, cos my throat tickled for a moment. And he came over, and put his blanket over me, and even tucked it in under me so I was all wrapped up and warm.

I suppose sometimes, there's no need for words huh.

:) Ok I am going back to bed now, and going to put this blanket back on him. 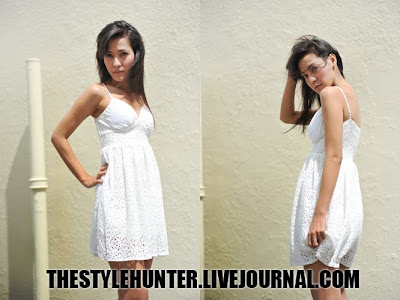 And.. check out the GUESS post just below this too!

Good to know you arrived safely!

26 hrs is a marathon flight.
BTW if you continue to find Europes weather cold, purchase a fleece layer or two. Under a jacket a fleece layer can bring a comfortable degree of warmth. Additional leggings might be a good idea.

Anonymous said…
i hope you won't end up all neurotic about carbs/food you eat. eating disorders aren't fun and there's just a fine line separating disordered eating and conscious/mindful eating.

Anonymous said…
Hi Holly, the pictures of you in Hungary were so pretty! Which brand and model of camera do you use? - Yvonne
12:22 am

J said…
I'm sorry HJ i do think you're a good person but your eating habits are indeed ridiculous. Cutting out carbs from a diet is like cutting out a complete food group, there is no theoretical or practical way that it would do any good to your body. GB is right to force you to eat... anyone in the right mind who cares about you would.

So congratulations that you found the right man for yourself, seems that he is good for you.
9:06 am

Please try to eat some carbs as weather in Hungary is cold, you need them. Not that to the extend that you have to eat lots of them, but they help you keep up with energy (from the cold) too. dun worry abt being fat from it, as with all the walkings and exploring you do, you'll burn them in no time.
The colder the climate, the hungrier you'll get.

Dress warm and please be well. As I mentioned before (and David has also said the same thing), please wear a warm fleece jacket or sweater. Or wear a long sleeve shirt with a slip-top inside and over it, wear a nice body-warmer or jacket. :)
4:21 pm