The Approach On The Big 3-0

on September 23, 2010
On Wednesday night, I had an early birthday dinner with my dearest friends at Villa Bali. (Since I'm not going to be around on my birthday weekend). 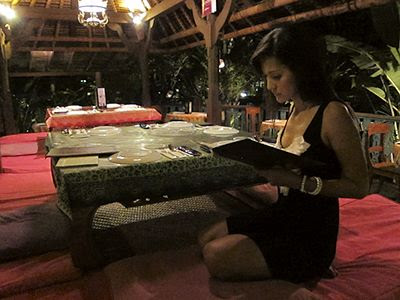 GB & I got there on time, and my friends were running late. Alwyn was held up at work. Farizan's (sometimes known on my blog as F) cab driver, the idiot, took her to Havelock Road, instead of Lock road! And heard Villa Bali as River Valley. Haaaaaaaaaaaa.... 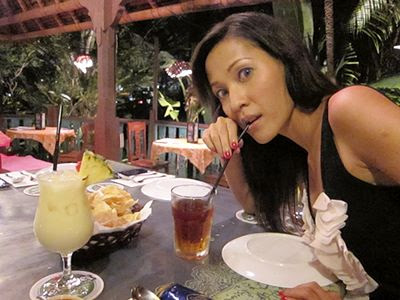 So while waiting, we had drinks. GB had a nice fruity one while I had a Jaiger Bomb... haha... almost 30, I and chose a jaiger bomb... so classy HJ! 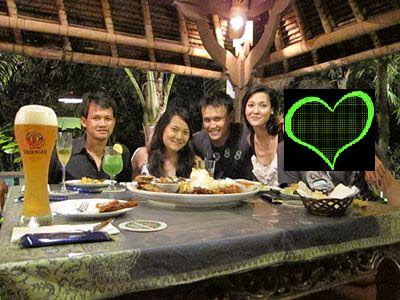 But everyone made it in the end. Farizan(plus baby Tara in belly) and her husband Andy.... and Alwyn. (I hearted GB out of the picture... not because I don't want to share but I'm just trying to give him as much privacy as I can, in my blog world)


I may have tonnes of aquaintences, but I have very very very few close friends who have been with me through shit times and good times alike... and yet don't judge me unfavourably. The last few years have been somewhat sad because Farizan works in Indonesia... and then went on to get married and now lives there! And Alwyn just spent 3 years in Denmark.


So it's the first birthday in a yearssssssssss where I have both my best girlfriend and best guyfriend in the same country as me at the same time! I'm glad GB got to meet them both AND likes them! 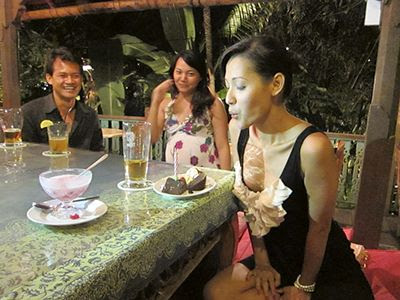 Blowing out the candle on my brownie dessert. 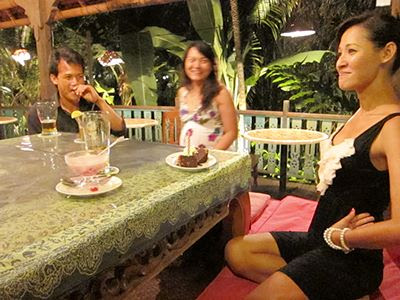 It was such a happy night... and there'll be more to come now that Alwyn is back for good, and F is here until after the baby is born.
P/s- my bouquet dress is from thestylehunter ... black is sold out, but you can still get it in white.
--------------------
Random Thoughts as I Approach 30
I don't know if this is a sad fact or not, but if you took the internet away from me, I would feel crippled.
LOL does not mean "laugh out loud", it means I'm not really interested and I have nothing else to say.
I am not very fussed about being politically correct.
I wish people would just say what they mean.
I don't like or watch GLEE or Twilight.
I have not experienced snow. (I know! How deprived!)
I now have less patience for the incompetent.
Chocolate flavours taste like chocolate. Mango drinks taste like mango. Banana milk tastes like bananas... but Why do strawberry flavoured things NEVER taste like strawberries?
One of the worsts points to realise you're wrong is in the middle of a heated argument.
Smoking. What's with the yellow boxes and the segregation? Air is air. So one can smoke here, but 2 inches to the left, it's not allowed? Isn't having a smoking section, and smoking tables in the al fresco part of the cafe/coffeeshop just like marking out a yellow box for peeing within a swimming pool?
You know the thing about Men with flash and expensive cars- that they have small dicks and are just compensating for that? I think it's the poor men who started this rumour out of spite and envy.
I skip when I am happy.
I am happy.

Anonymous said…
Yeah i got tricked by the strawberry. The ice cream and the milk shake taste so good but i never once like the fruit!
3:19 pm

kiwi said…
yeah! i totally get the lol part which means i'm not interested and have nothing else to say. But some people NEVER get that.
3:23 pm

Anonymous said…
Yeah, the strawberry is smarter than you think :P
3:47 pm

G said…
"Isn't having a smoking section, and smoking tables in the al fresco part of the cafe/coffeeshop just like having a Peeing section in a swimming pool?"

Holly Jean said…
i dont think it's a strong enough argument to ban smoking altogether.. all I was trying to put across is that segragating the physical floor area makes no difference to the actual air we breathe when it's all outdoors anyway.

The restriction is superfluous!

Congrats on achieving 30 years on the good Earth!

Being twice your age I can only tell you the best time of your life is yet to come.

The first 30 years only just prepare you for the challenges and opportunities the next 30 and more years will bring your way.

Enjoy each day you awaken and take a breath!