And So Ye Shall Reap 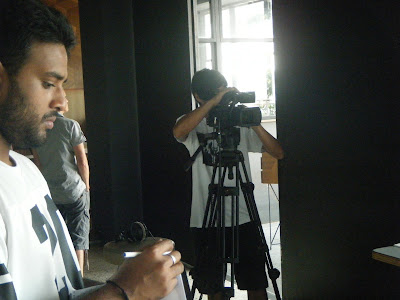 Had a quick filming session today for a new Love Documentary. Should be interesting... will let you know more in August when you can watch it. 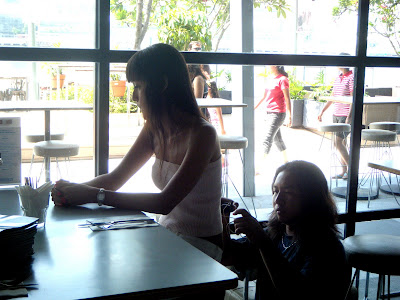 Getting miked up.. God.. would it kill me to smile a little?! 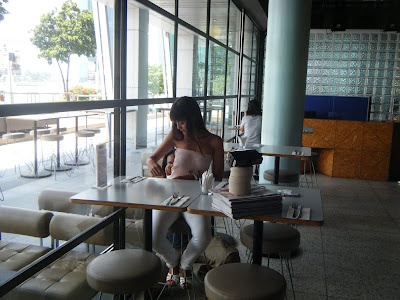 Then hung out with "A" (no longer known as Magic A... I first coined "Magic A" , because blog readers were asking..." so who's next? A,B.C...?" so I was half kidding when I labelled him Magic A). And now, because of the turn things have taken... I am afraid calling him Magic A might just jinx it! 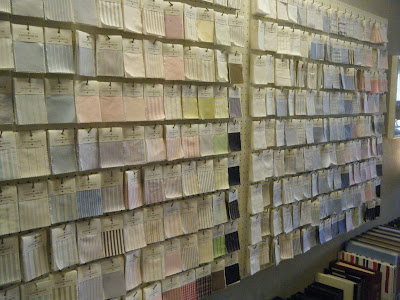 After filming, I went to help him pick out design/fabrics for a bespoke suit and shirt. Look at all the swatches and swatches of fabric!! And they were so professional and knowledgeable about everything suits and what suits different types of men/shapes. Guess they have to be, at the prices they charge! 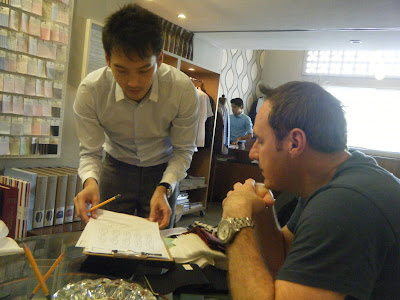 "A" doesn't tuck his t-shirt in btw. (Thought it best I clarified that here lol) He had to do this temporarily so they could see where he wanted the trousers to sit around the waist. And yes, I can walk under his armpit without ducking. 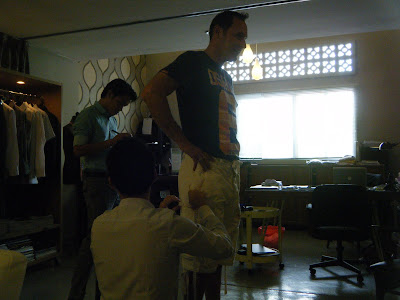 We were supposed to spend the day at Sentosa, but that had to get canned because he had to do some conference calls in the late afternoon. Imagine lying on the beach in sentosa in the sweltering heat, and having to talk and think work!? Not a good time, so we decided to put sentosa off ... maybe this weekend.

We had a swim instead, and because the idiot in me didn't want to wet her hair (which got wet in the end anyway!), I did about 4 laps (short ones, this wasn't a lap pool) doing breast stroke, with my head out of the water. My body must not be used to this stroke...cos today my neck hurts!

Remember me mentioning that I received Facebook msgs from a girl who claimed to be sleeping with and dating "A"? Turns out, A was telling the truth after all... he has never met this girl in the flesh, and she's actually linked to me in more ways than one. Loong story but she knows my ex ex (No, not Mark), and my friend I went to Bali with has been out with her before (platonic though cos they both love football) and she told him shitty things about me too.

What was she thinking? That if she bad mouths me, men don't have brains for themselves to see how I really am around them and will just believe her? Or that if she makes up a vicious lie about sleeping with a guy I am interested to start dating, that I will just drop him like a hot potato (without prior sleuthing) and so she can get my dregs? (I saw ur real facebook pic honey... my advice is, aim a little lower)

reowww *clawing action* ( I am only kidding. You can aim for whoever you want, it is not my place to judge you. But don't stoop to such means... What have I ever done to you to deserve you bad mouthing me to every man who even mentions my name? Or worse still, tell me such a damaging lie that made me mistrust someone I like)

Of course I won't name and shame here. I don't think it's right, and I would only do that in extreme extreme circumstances.... if people really cross me. But wot a Nutter! Thanks for smearing shit on my first experiences with "A".

Someone commented yesterday that I was spotted holding hands with someone. Yes, that was "A". Is it exclusive yet?? I don't know... we need to know each other a little better. And I need to get the whole not trusting him episode out of my system too. Which for me is damn hard.

So yes, up to this point I have been keeping my options open because of Nutter and her cans of shit, and because I don't know "A" well. But I hurt someone yesterday, because I had been keeping my options open. And for that I am sorry (though I know sorry doesn't fix the hurt I caused). What was I thinking, that just saying things weren't exclusive was enough to not hurt people's hearts. I hope I don't have to do this selection process thing ever again. I am a rubber ball... I bounce... but sometimes I forget that there are people out there whose hearts are made of porcelain. I'm sorry I could not protect your heart.

Valuable lesson I've learnt, you need to protect your own.

Although I'm going to take things slow with "A", I'm closing off all other options, will see how this progresses.

And stop sending me emails about this Cullen guy suppossedly a player from Stand Chart. I have never been out with him, don't know him. But thank you for your concern and for always looking out for me :)

Holly Jean said…
P/s pls dont leave comments/links flaming this cullen guy. my suspicion is it was all started by one person and it's now some big vicious rumour. Seeing as I dont know this guy, I would rather my blog and myself not be used to propagate it.
11:09 am

eff said…
Well okay cool. Since it's your blog you can always remove my comments. Everyone's entitled to their own opinion of course and from what i know/found out from friends and aquaintance, Henry Cullen guy indeed has a bad reputation of hunting around and supposed promiscuity. No smoke without fire i would say. Now that's my opinion.
12:28 pm

Anonymous said…
hey, just wondering. where did A go and make his suit? how much did it cost? my bf wants to get a gd suit made too

miss piggy said…
did "A" make his suit in Victor York? They r reali good. i have a few shirt-dresses from thr. And congrats ur closing other options now and jus focusing on gettin to know him better! Good luck and hope he's a great guy. But isnt it weird to be holding hands with a not-confirmed boyfren??
3:12 pm

@MissPiggy... ah.. u again :) u caused quite a stir u know, when u announced in the comments tht you saw me holding hands with a guy . haha. But all is good... at least I'm on track now... might not be the right track.. but time will tell and I will figure things out slowly I guess. Nah.. wasn't wierd holding hands,holding his hand made me feel secure.
3:58 pm

miss piggy said…
haha sorry i busted u! u walked past the bar i was in and i thot u looked familiar. then i saw ur tattoo and knew it was u. U look good in person but think u lost too much weight. wud b nice if u put on a few pounds!
7:43 pm

Celestina said…
Looks is not everyting. So what if te person is gd looking but the relationship doesnt work out? Impt thing is the chemistry, character, te love for ea other etc etc

HJ, i assume tis 'A' has no baggage? Take it slow, have fun & enj every moment you can with him. We nvr knw if it will eventually work out or not but wat te hack! its a wonderful thing to love & to be loved!!

Anonymous said…
Ya I agreed with HJ. I saw the same link to that other blog & the same name mentioned in other blogs & forums (by this similar nickname)& it appears like some sort of spam. Pls don't come to mess up other people's space because of your some nonsense revenge action.
12:56 pm

eff said…
That's because 'this similar nickname' is the same person, duh. Chanced upon that entry and posted the link on the forum. Well well, i was just merely asking out of curiousity because i don't visit here on a regular basis and i saw her comment on the Cullen guy so was wondering if it's Henry Cullen. Anyway HJ already removed the link and i am no spammer. I am eff. Alright, you anonymous? :)
7:28 pm