on March 23, 2010
S raced in the Aviva Iron Man 70.3 on Sunday. That's a swim, bike and run for 70.3 miles! I think that it's sheer torture and madness to put your body through that (!). I could NEVER do it and I think that anyone who completes it gets my respect. Even though S was a little disappointed that he didn't hit his target time, I'm still extremely impressed with his performance. Kudos to you S. :)
Meanwhile... us lesser mortals... just eat junk food. You see, a few weeks ago, my cousin Kristian Tweeted tht he was craving a HANDBURGER. And I actually thought a handburger was like a new slang for a wank, or a new masturbation technique. 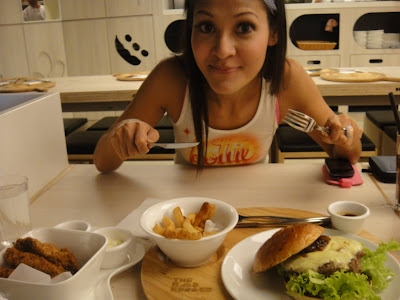 What?! Don't look at me funny. It really does sound like that! A Hand-Burger.
Anyway, I soon found out that HandBurger is a burger joint at 313Somerset, and Kristian was raving about it. So since I was in town (had a meeting to attend and collected some products from ettusais), I met up with my friend Matt for lunch at HandBurger. 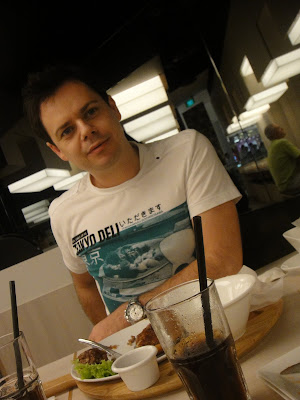 The verdict? Matt thought the Handburger was good. I could give it a miss ( but in general, I'm not a fan of burgers). Slightly over priced for a burger I think... the normal cheeseburger with some fries is SG$15 something. Halfway through the burger we kinda both felt like eating fried chicken instead. But as far as burgers are concerned, I'd say taste wise, it's on par with Carl's Junior.
--------------------
Click on pics below for Further Reads:
One Seriously Confused Female 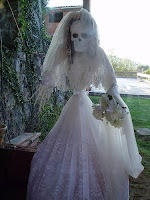 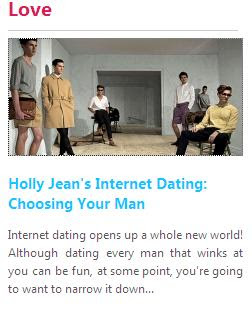 This week on MyFatPocket. Part 2 on Internet Dating- How to choose your Man. 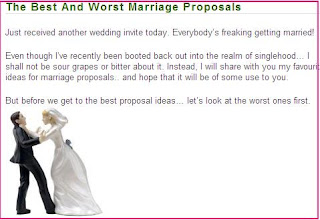 But.. if you're past that stage in life, (Booo!!!! I'm envious!!), then this post on Proposals may interest you.

sleepy said…
hey hj, i thought of the same thing when i first saw the word handburger. Maybe it was really meant to tease consumers in a tongue in cheek fashion.

i clicked on the larger view of the first photo and saw that your eyes looked bright & lively. =)

apart from being happy, any eye make up on? mind sharing? (please?!)

But if of you out there in tv land doesnt realize Holly is just using this whole dating thing to drive up readership on her paid blogs then wake up fella's
10:55 pm