Do I Want To Freaking Get Married Or Not?

on June 10, 2009
A couple of months ago, one of my close girlfriends got engaged. And last week, my best friend informed me that she's getting married on the 4th of July... THIS YEAR. 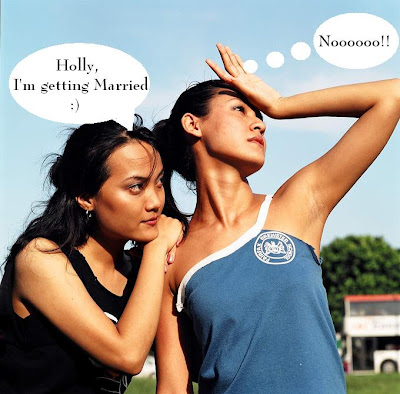 I may have a lot of acquaintances, but good friends? I don't even need one hand to count them on. So having 2 of them settle down, should be somewhat alarming (especially when BOTH are 1 year younger than me). 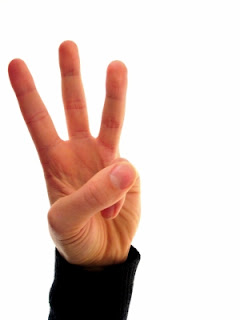 But for once, I don't feel that sense of impending doom... I don't have that voice in my head which screams "Oh My God! Holly! Everyone is moving forward and you're NOT!" [Kinda like those dreams I used to get as a kid where I'm in public and suddenly I realise I'm naked]
When I was a teenager, I thought for sure I'd be married at like 23 or even earlier. But then university happened... and it was a phase of endless possibilities, frivolous dating and definitely being too juvenile to settle down. Then when I got to 23 and graduated... I pushed the bar up to 26 (to give myself time to get a career going)... and then subsequently I pushed it up to 28.
And guess what??? I'm already 28. Spent the previous 4 years building a career... and then hated it and resigned! AND I'm still single! (How's that for Square One?!)
So I'm actually quite surprised that right now, I'm not at all sad (for myself) or envious of my best friend getting married.
Why was I not like that before? Before, I used to secretly hate it when a friend's relationship was progressing too well... especially since I could never make any of mine last... and they were 90% of the time turbulent and like a bloody battle field of wills and one-ups.
(What I mean by one-ups... is my need to always have the better hand. Like if he went drinking with the boys, I'd go out looking for a more wild time than him... just so I could have one-up).
I know.. I'm not proud of myself.. but that was how I was, that made sense to me (back then). I admit, if I had married any of my previous Boyfriends... it would have beennothing but a miserable failure. Though it would have probably given me more juicy things to blog about ...haha)
I've been giving it some thought and I think I am no longer threatened by other people's success and I don't feel a sense of urgency when my friends are finally settling down.. because I am happy.
I'm in a good place right now. Been with Mark 8 months now (so fast!), and we're progressing well. It's been such a good relationship for me... that I know that even if it doesn't work out... I'll actually come away from it a much better person than when I started the relationship.
In these 8 months, I've learned so many things about myself - my weaknesses, strengths and motivations... I've come to see what a positive relationship feels like and be grateful for the comfort and security of having someone I can depend on.
Maybe I've found the ONE and thus no longer feel the need to rush things and get married (and hence not feel envious of other women getting married). Maybe I've become so confident that this relationship will move on to the next stage at the right time that I don't feel the need to play mind games and manipulate a proposal out of my boyfriend. I am madly attracted to him, I love him, trust him and think he would make a wonderful husband.
Or maybe I'm just chicken shit and have duped myself into believing I'm perfectly happy where I am right now and I shouldn't spur any more progress... because I'm in reality, afraid of moving to the next stage. 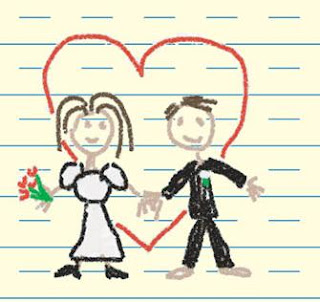 What happened to Holly Jean? The Holly Jean who already had her wedding planned out sans any inkling of a proposal.
I find it all very ... strange. It's like I suddenly don't know myself.

Your time will come when Mark ask for your hand in marriage :) Both of you look sweet.

What happened what things change and your priority changed. Other people wanted to settle down quick, have babies etc. Yours was your career first earlier on. For now i think it can be included was traveling :)

My cousin (a girl), waited till when she was 32 when she got married, was dating the guy for more than 4 years. Now they have 2 babies :)

Now they live happily ever after :)

Anonymous said…
Is that girl in the photo called Farhana?
9:00 am

Enigmaysl said…
Well, I mut say that allof us went through this phase, a phase of comparison with closest friends.

Just like you, I no longer feel the urge to get hitched just because all the people around us are getting hitched. The best response to "when are u getting married?" question is " Next year". There will always be next year ain't it ;)

I reckon it is more important to build the foundation of a family unit and great partnership.. all else will fall in place...

Celestina said…
Holy
Nothing is wrong with you, its te process of growing up. We change as we age, be it our mind set, our pirority etc. We mature overtime.

Frankly, I still feel 28yrs old is still young : ) Besides, you guys hv justed started. So get to knw ea other better & continue to fall deeply in love : ) Of course im not saying u dun get married, jus tat when the time is rite, it will be The Day. So jus let nature takes its course, let Thy Will Be done : )

I'm sure all yr readers will be happy for you when the big day comes. So meanwhile, keep falling in luv : )
9:53 am

Face it said…
Mark will never marry you HJ. You are just a plaything. Why can't you just see that.
10:45 am

Anonymous said…
:) I had planned to meet Mr Prince Charming at 18, get married at 21 and 1st kid by 22. Wanted 4 kids, either 2 boys and 2 girls or all girls.
I am 28 now, and I have NO idea where my Mr Prince Charming went. Lol. But I was never as satisfied with my life as I am now. Sometimes I think I would not have been as happy if my dreams back then had come true, with 4 kids and a man to panic about (OMG, what was I thinking about at that age?! 4 childbirths!!!).
So I guess you are not alone in your situation and thoughts. It is ok to take things easy and let nature take its course. Enjoy the journey meanwhile. Esp since it looks like Mark is treating you very well. :D
Cheers,
Cyn
11:28 am

Jess said…
did you break up or what? single again? if i were you, i would have stuck to your 26 year old marriage age. YOU STILL VIRGIN?
11:37 am

With marriage, I think you need absolute certainty before stepping into it. YOu were just a young girl with unrealistic dreams then, but now you've matured so you know what you really want. Your dreams are no longer baseless and cotton candy-ish. It is a good thing to not feel pressured by your friends getting married especially when you're not ready.

For now, just bask in the bliss of having someone who has brought so much joy into your life! =]
11:41 am

Holly Jean said…
yeah,,.. you're all right.. I guess I'm just finding it a bit strange.. cos I'm suppossed to be at a pt in my life where I shld be eager to settle down.

I have a good man, my fiends are all settled, and I'm 28 plus. Yet, over the last month or so, the urgency has gone.

not tht i DONT want to be married.. I do. But like.. I'm so relaxed abt it. which is a stark contrast from what I was like before. :)

Anonymous said…
Holly, is Farizan really getting married????
-Hartini (from TPJC a long time ago)
5:34 pm

Holly Jean said…
photos are for illustrative purposes only :)
6:11 pm

Anonymous said…
Well, for me, I'd say enjoy the relationship, let things take its natural pace, even if everyone else around you is married with kids.

Farizan said…
Dear Face It,
I think u are jealous of Holly's life, no? That's why u are trying to make yourself feel better by telling her to face up to the fact that she is Mark's play thing? I don't think Mark is stuck in that juvenile time zone u are in.

And Hols,
You will always be my best friend no matter where i move to. You know this wedding hasn't been easy on me and Andy too. We realised that we may be ok with the differences in culture but our families need time to adjust.
You and Mark are already settled and I am glad you found a good guy to take care of you. It took Andy and I 4 years to come to this decision. Age is just a number. As long as you are happy, dont rush it. Love, Farizan
1:56 pm

Anonymous said…
Farizan, if you are really getting married and I am finding out through a BLOG, I am personally going to your house and demand an explanation! Oh btw, I'm pregnant. See at least I'm telling YOU first! ;p

PS. Sorry Holly for using your blog as a form of communication to someone who hasn't called me since she got back.