What I Did In Spain So Far 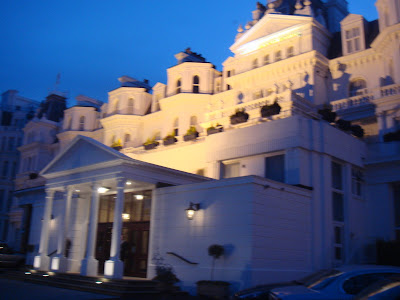 Last night in eastbourne... (The Grand Hotel)... They tried to over charge us with a whole list of nonsense when we checked out though! Stuff like 50pounds extra (for each night! and we were there 3 nights) Smoking Fine (because the rooms are non-smoking). But both Mark and I don't even smoke! Other than that, it was a perfect stay. 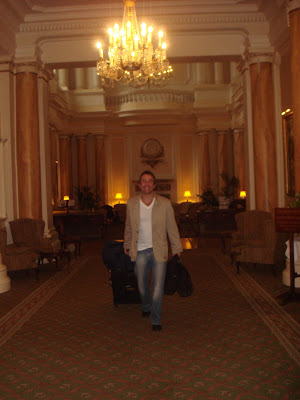 This is Rock candy... quite popular here.. u can suck on it for ages. Haha. Comes in all sorts of colours but mine has to be pink, of course. 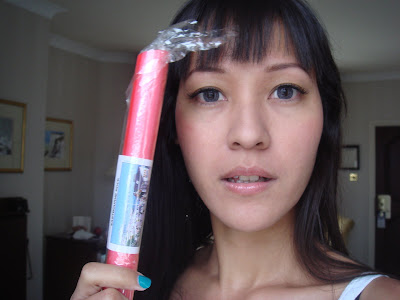 Had to fly from Gatwick... to Malaga, Spain... like my toe socks? 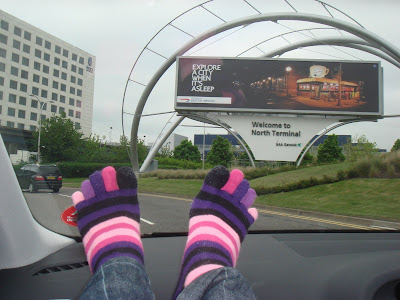 I don't think anyone's interested... but my new phone is a Hello Kitty mobile. Annoying thing about it is that it's touchscreen. I want my button keypad back.... 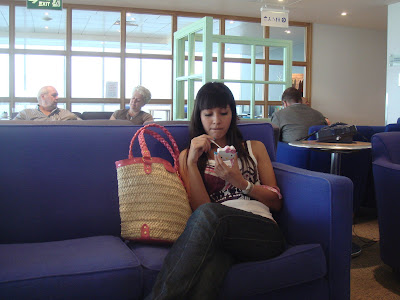 Hired a car and drove for about 45 mins west (towards Gibraltar) to Marbella. 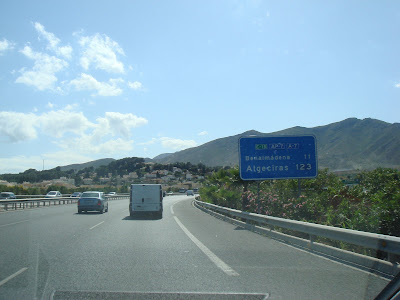 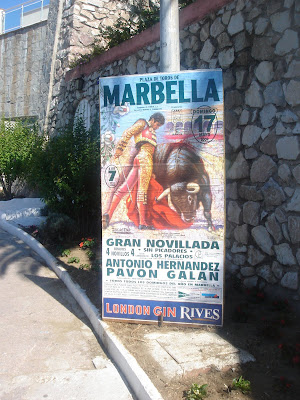 Puerto Banus, which is where we're staying, just off Marbella. 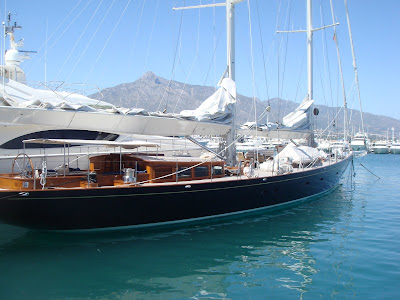 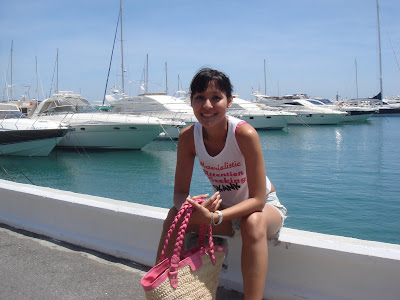 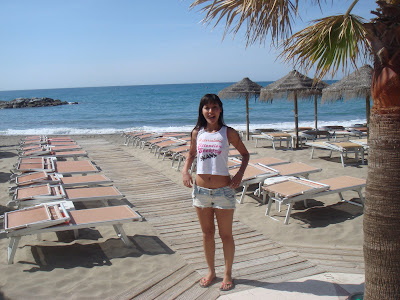 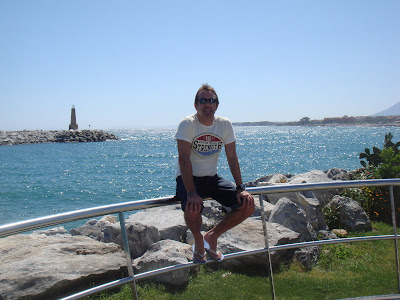 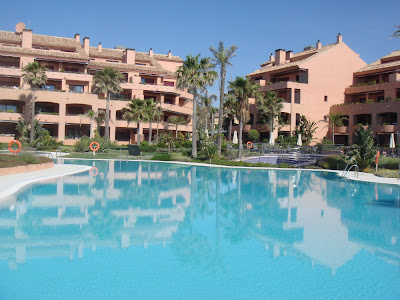 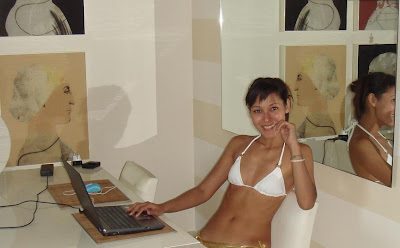 My bikini top is 8pounds from H&M... and my bikini bottom was bought back in Singapore (Far East Plaza). And my shades only 5euro from the Saturday street market. 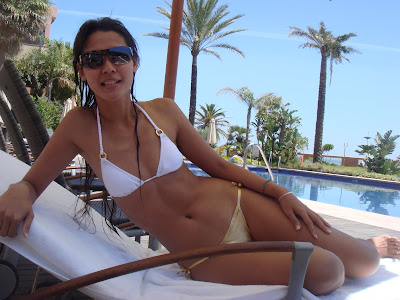 My little wardrobe in the apartment... so I don't have to live out of a tiny pink suitcase. 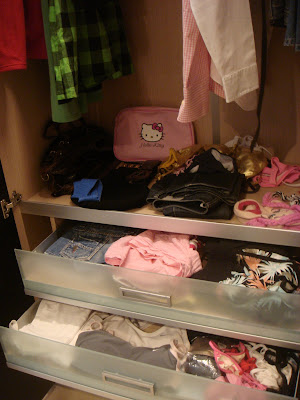 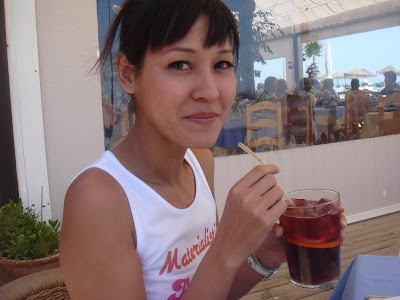 Everyone eats so late here.. lunch is at 4pm, dinners at 10pm (or later!!). I'm hungry all the time here. But I do love a cold Sangria by the beach. It's my first time drinking it, even though we do have it in Singapore. Feels like a sweeter version of the Long Island Tea. The infamous concoction which had me slurring and falling flat onto the floor on many occasions in my mispent youth. :) 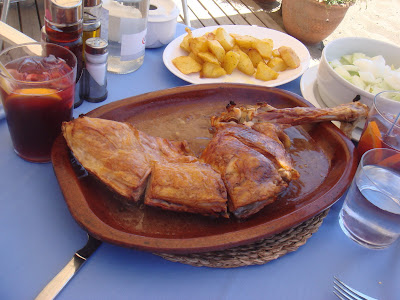 For lunch yesterday, we had some really good lamb at this restaurant called Aurora... 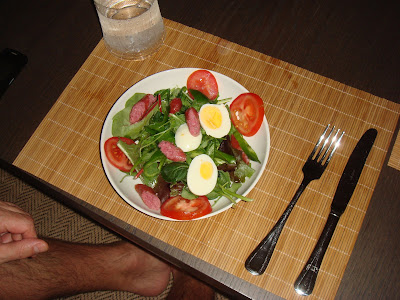 And last night I made a healthy dinner for us. Cos Mark has been very indulgent and letting me have chips, pizza and burgers all the time in England. So now, it's his turn. Tonight we're going out to eat (I'm hoping there'll be at least one thing fried or fatty on the menu for me). 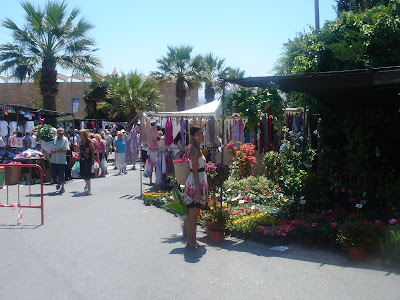 We also went to the street market at Puerto Banus (held every Saturday morning). Skipped the gym today. 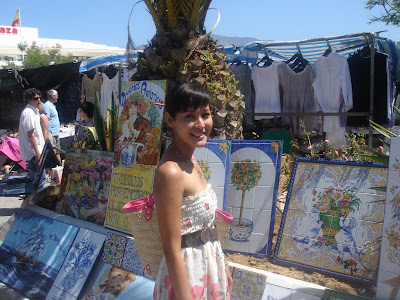 Lots of stuff sold here... and though price wise, the clothes and bags sold here can't contend with Singapore's Bugis Village, there is tonnes of variety here. I bought a nice white dress for 15 Euro.. and shades for only 5 euro( I think it's a dior rip off though!!! lol). And comfy espadrilles for only 5 euro! Show u pics later on when I wear them. 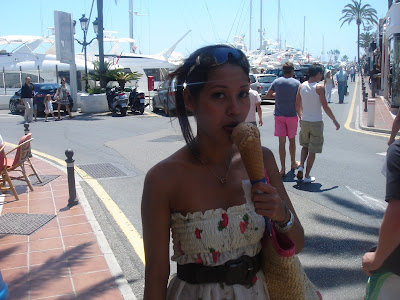 And this last picture...is of me looking like a miserable cow... even though I am eating yummy hazelnut ice cream.

:) At the pool by the apartment now. Can' t wait for dinner... though it's only just 5pm here.

Anonymous said…
omg. my friend has one hello kitty mobile too.. and i was just abt to post it up on my blog. i think it's really cute :) you have a great body holly :D
1:39 am

Anonymous said…
first the slippers, now the socks, you rock!

hmm.. i dont know about your touch screen, mine has the keypad and keyboard thingy.. i personally use keypad with fingers, not the stylus. but have to keep the nails short so im comfortable typing.

not sure what is it you dislike about the touchscreen, or prefer about button keypads.. but if you miss it, perhaps use the previous phone back?

and lol. you wore the materialistic attention seeking skank shirt. how does it feel?
2:53 am

qf said…
the view from mark's aparment is soo beautiful!~ =)