on May 30, 2009
Even though we were very comfortable on Charlotte Street... for our last night in England, Mark and I decided to drive out of London to see if we could find a nice rustic B&B. 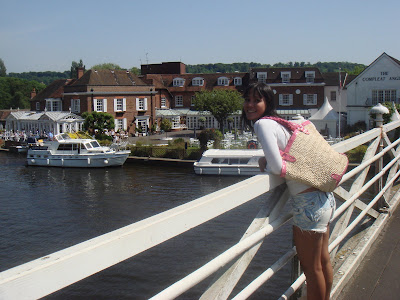 We drove through a few places... the names of which I have already forgotten. 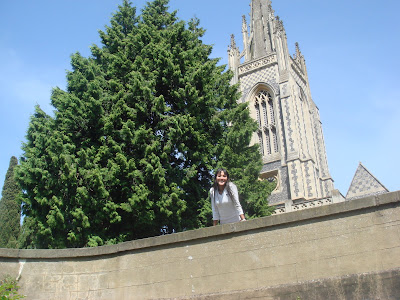 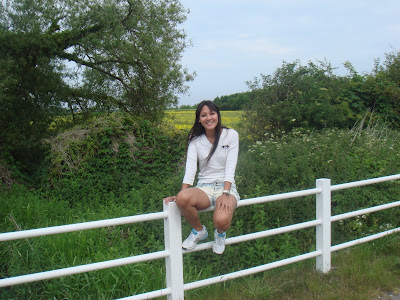 And ended up in Stadhampton... at a very unique looking hotel called The Crazy Bear Hotel. I was enchanted... the exterior looked like it's right out of a fairy tale... 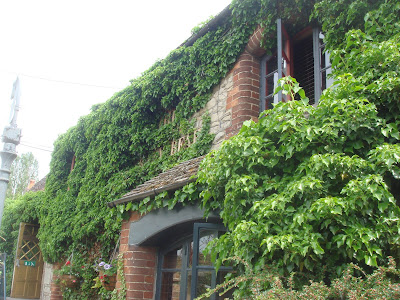 And their restaurant was deliciously pink and pretty!!! 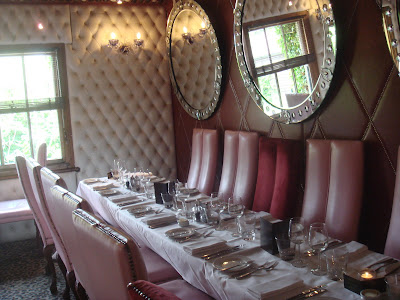 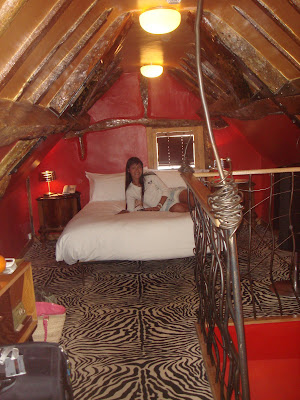 It seemed alright... quaint little room in the attic. So we settled in... and ten minutes later.... 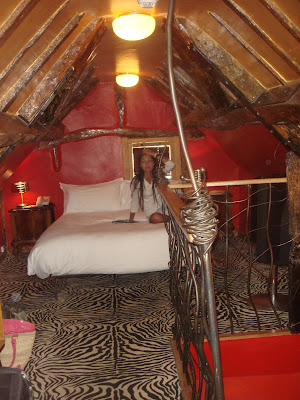 It was stuffy and suffocating. We couldn't walk to the sides of the room without bumping our heads on the beams. And I was walking around bent over like Quasimodo most of the time. Extremely over priced room... because it was really just a bloody colourful treehouse nook.

All the rooms have no air-conditioniong. There was never a need for it.. but we had one of the hottest days England's seen all year.
I was starting to worry...because there was no way we would be able to sleep in such stuffy conditions. And then there was the nightmare 13 hour flight to face the next day as well.
But we decided the best thing to do was to get dressed and stay out of the room. Only come back to it to go to bed.
So I took a cold shower, put my hair up, wore my new pink dress (only 12 pounds from a shop 2 doors down from Oxford St's Primark, I forgot the name). 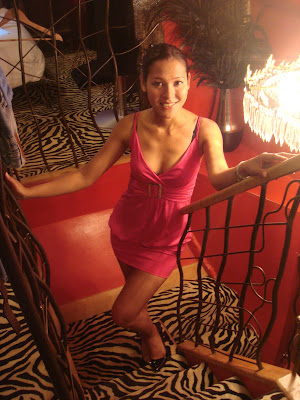 The room is really a nice room though... funky and unique style... (just that it's much too hot in the Summer. Pity) Such a small room plus a giant Heat producing chandelier which doesn't have an independant power source! So if you switch it off, all the lights in the room go off! 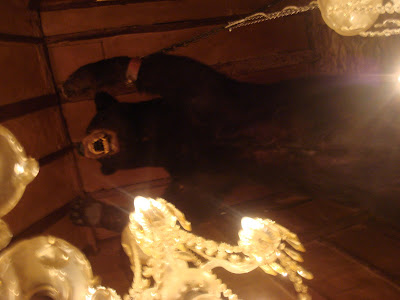 The Crazy Bear Hotel.... is just crazy. And will drive you crazy if you stay there on a hot summer's day. 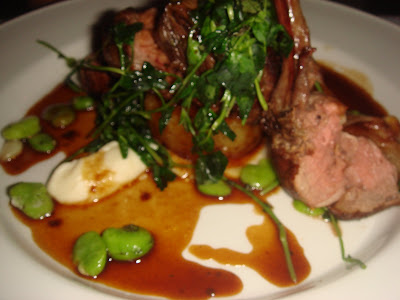 We had drinks at the bar.... and then dinner at the pink restaurant in the hotel. It was so good to be out of the hot room... and the food was not bad at all. 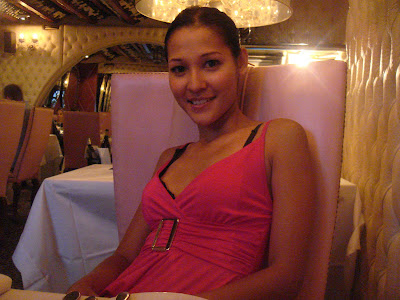 After dinner.. we went to the little courtyard in the hotel to have more drinks.... we really didn't fancy going back to our room so soon. It was so nice and breezy outside... 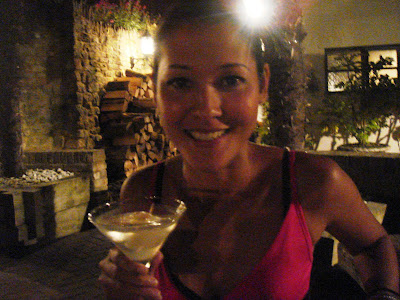 The wonderful bar staff pulled together a Lychee Martini for me... even though the waiter had never heard of Lychees before.. and it wasn't on their bar menu. How's THAT for service!? And it tasted good too. Don't ask me how the hell they managed to get lychee itself... but it was in their freezer in storage. Lol.

And to our wonderful wonderful freaking wonderful delight... it started raining! Mark thinks I'm a witch... because the weather always goes my way. Wonderful sunshine in Spain all the time we were there and the day we were leaving, it rained (haha to the poor people trying to get a tan). Then hot days in London... so hot I could go round in my shorts! And now a cold rainy night that I needed in order to sleep well in the furnace of a room. It was so cozy and romantic, wrapped up together and falling asleep to the sound of raindrops. 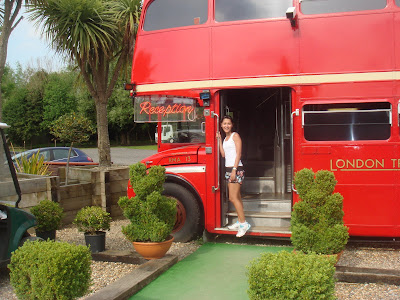 We woke up well rested... and decided to borrow the hotel bicycles from the reception (yes, the reception is in an old stationary London bus). Told you they were Crazy didn't I? 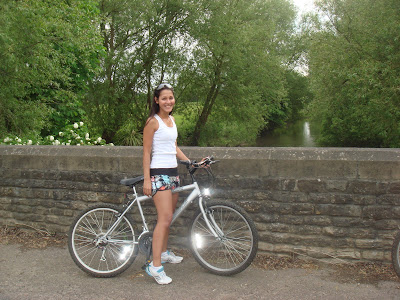 Even though I'm smiling... I really didn't enjoy it much... because I can't cycle properly... and haven't done so for ages! Was so afraid of landing in a ditch. And my hands hurt because I had my fingers stretched out to hold on the the breaks the whole time. 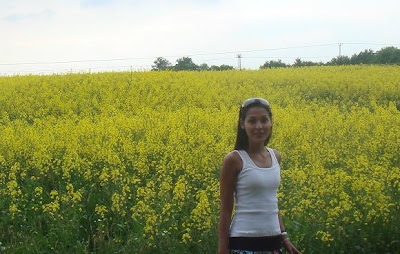 So needless to say, the cycle was a short one (couple of miles and back). And we returned the bikes and went walking in the fields instead. Which suited me much much more... even though I am repulsed by soil. (just hate the way it smells)
That was how we spent our last night in England.
The flight back was actually pretty good. I got a good sleep, watched a couple of movies, some stand up comedy, played who wants to be a millionaire ( I was rubbish), dinner and breakfast served wasn't too bad, and I ate a lot of cookies which I stashed away for the flight. Now That's 13 hours well spent!

Anonymous said…
holly, your dressing is really nice and hot in ur pics...lucky mike!!
11:26 pm

Anonymous said…
loveeee ur pink dress!!!!! Yea im the same person who said ur wonderwoman dress is skanky! Haha
2:14 am

Holly Jean said…
haha.. whooops!!!! I never noticed his reflection in the mirror!!

take care holly,
xo
(from the girl who pointed out the reflection :D)
8:53 pm

I'd like to invite you to join a contest "Win the World's First Transparent Phone" @Travelerfolio, in conjunction with LG. Pls drop by to find out more -