Have You Cheated on Your Partner?

on December 14, 2008
Here are the results to Holly Jean's Confession Box poll: 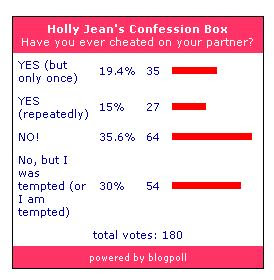 Before we get into detail, I'd like to thank all of you who have taken part in the poll, without you, this post would never have been possible.

Out of the 180 readers who have taken the poll, 34.4% of them have cheated on their partner at least once.

Which basically means that one in every 3 couples has a cheater. Well, you have to give this ratio some flexibility, as it's not entirely impossible that with some couples, both partners cheat on each other!

But isn't that a bloody scary statistic?!

I actually watched Oprah last Sunday and this statistic - "1 in 3 people have cheated on their partners" was mentioned. That's an appalling number of dishonest, adulterous people around!

And based on the poll I conducted (where my readers had no reason to lie or be defensive), it supports the 1 in 3 ratio!

I'm not here to pass judgements on my readers. I myself had to click "YES" when answering my poll.

What I am interested in finding out is - for those who cheated (either just once, or repeatedly)... Why? What were your motivations? Did your partner ever find out?

And for those who have been cheated on, in your experience, what do you think of second chances? Is it worth a shot?

Or do leopards NEVER change their spots? Once a cheat, always a cheat? ( which would mean me too???)

P/s- In my blog, just because I discuss topics like cheating does not mean that I have just cheated on my partner, and am feeling guilty and thus have to blog about it... Just need to clarify this because I received a few emails from readers who thought I just cheated on Mark!

Annoymous said…
Whats with everybody when they cheat on their love ones. maybe love is gone , maybe the other is a sadist , etc etc.

The one i really loathe is when you cheat on a partner when your partner is 100% devoted to you and nothing less but yet maybe abit too boring for you.

The adventurous party then finds another guy hence cheated on the good partner and well ... poor partner :(
11:28 pm

I think most of the time when people cheat is is because the one they cheat with makes them feel wanted and the one they are married/committed to does not.

Before I was a husband, I slept with some wives and this was always the case.

I have never cheated. (since married, 12 yrs)

No not once a cheat always a cheat I don't think, I think it depends on the partner as much as the cheater.
9:36 am

Anonymous said…
I think a leopard can change its spots, at least, from the woman's pov.

Holly, I liked a previous line from a past entry - how you wouldn't cheat again because you're enjoying exclusivity so much right now. That line really stuck in my head, somehow - and I totally identified with it! Maybe it's a sign of our developing maturity? :)

I'm dating someone right now, and enjoying the simple joys of mutual exclusivity and commitment. I think it's something I wouldn't have been able to appreciate in my younger days. And if things work out, I don't intend to EVER cheat on him.
9:52 am

Anonymous said…
just goggle on brazilian waxing and found you. U tried FabulousTan Waxing? I am quite tempted on their 1yr unlimited waxing for $299. Did my 1st wax at Strip and looking for a 'long term commitment'. You are right, BW make girls feel more sexy. http://www.fabuloustan.sg/waxing/index.html
5:01 pm

Holly Jean said…
anonymous5-01 .. ok will check tht site out... unlimited waxes at 299 is a really great deal. but depends on how easy it is to get appointments. .. how good the therapists are... and location. update soon.

anonymous 11.18 and Dee
I actually think spending more time with another girl, sharing intimate or emotional feelings which you should reserve only for your partner.. is ALSO cheating... not just the physical stuff.. but then again.. I have very low tolerance for stuff like tht .

Dee Again- you know.. u actually make me smile when I read your comments.. it's like you totally "get" me.

Southern Sage- 12 years!!! good for you. U must be a very happy and fulfilled man.

harmony- i really don't know why people cheat on their loved ones and then remain with them... :( and yes, life is so unfair tht bad things happen to good people.
6:57 pm


But of a lesser degree
- doing something that you know your partner won't like (with the opp. sex) behind your partner's back.

And you know what, Holly - I too feel that when you write, you parallel alot of my experiences and feelings, which is why I love your blog! I think it's because you're a very genuine, honest writer who says it as it is, unlike others who prefer to paint a picture of rose-tinted reality.

And also because we seem to have gone through similar past experiences and possibly share similar characteristics. Plus we're both Easties, heh.

Anonymous said…
I've cheated on 2 of my partners. 1st was my first bf and my first love. We were together twice. Twice I cheated on him and we broke up because of it. On both occassions he was in another country for studies. Ironically, he's probably the one that I cared about the most and we were perfect for each other. But I guess I was too young and timing was all wrong. I believe in karma though. What I did to him was did to me by the 2nd dude I cheated on. 3 times worse. And the only reason I cheated on him was cos I wanted to get back at him, but it left me feeling empty.

Would I cheat again? No. Because karma's a bitch and I really do not want it to happen to me again. Treat people how you want to be treated. With respect.

For the 2nd bf, I don't even considered it cheating. It was a tit for tat immature mindfuck which backfired on me.

Anonymous said…
Forgot to add, "sharing intimate or emotional feelings which you should reserve only for your partner.. is ALSO cheating... " I WHOLLY AGREE!!!!
6:39 pm