How To Get On A Man's Nerves

on November 08, 2008
Brief update:
Relationship wise: everything about it just feels so good. Even if it were to "die down" and were only half as good as it is now, it'll still be great. That's how high up on cloud nine I am.

Life wise: bit tired and busy- juggling my part time English classes, and for the past few nights, I've been busy filming at night. Can't tell you what it is yet, will be out later this year. Will blog about it closer to the broadcast date. 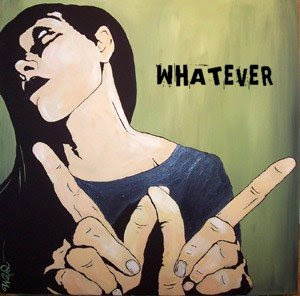 When he talks about something you're not interested in, just make a "W" with your hands and say "Whateverrrr" (you must remember to drag the word). Men find this so adorable.
9. Say one thing, but mean something else. And then get mad at him when he doesn't get it. Men love a challenge, so feel free to play mind games like this.
8. When you buy a new outfit, ask for his honest opinion. If he says something bad, cry because he's being so insensitive. If he says something good, cry anyway, because you know he's lying and scream, "Why can't you just be honest with me?!!!"
5. Bite him.
4. Don't let him shit in peace. You should infiltrate his personal space... sit on the side of the tub while he's on the toilet and update him on your life, and gossip, and shopping. That sort of stuff, I'm sure he's dying to hear about it... and it sure beats a boring magazine doesn't it?!
3. Turn up late when meeting him. Waiting for you will give him time to appreciate your eventual presence.
2.

Be a basket-case. Men love to take care of women and become heroes. So... the more damaged you are, and the more problems and hang ups you have, the better. Make him feel obligated to rescue you.
1.

When you have a disagreement, just use the line -"I know you better than you know yourself." Of course you do.. you're the perfect, hot but only just slightly delusional girlfriend.

Anonymous said…
girl likes to play fire, unless you are really hot, otherwise you may burn yourself. haha!
11:30 pm

Anonymous said…
Waha! We really havent chat or seen each other for quite some time, I also visited your blog less often. But you never fail to keep up with your interesting posts and systemetic layout, although not all of the above you mentioned really gets a man on his nerve in my opinion the whatever thing is a definite yes to anyone hah!
11:55 pm

but then i disagree ley, wif some of e points u input. like using e word "watever"... sounds VERY rude wor...

well... i dun mind my partner to sit in wif me while i poo-poo. provided she can tahan e smell... :P

azim said…
oho...
now i know why sometimes girls are really complicated to handle..
hahaha
12:44 am