The Worst Break Up of My Life

on October 15, 2008
My seasoned blog readers who have been with A Thing(or Two) About Holly Jean from the beginning would know who Skye is.

But for the benefit of my newer readers, Skye is my ex-boyfriend. Nope... not one of the many men I've dated in this past year. But a serious long term relationship. It ended rather suddenly, no cheating or big fight, but just a major change in life's circumstances which caused us to split. I call it the worst break up of my life! I was utterly lost without him, he was someone I was going to marry, someone I lived with and loved. And the night we split, I cried so incredibly hard into my pillow (with him sleeping right beside me) that I burst blood vessels around my eye area.

I cannot elaborate further, any explanation here on my part would make it seem as if I were pushing the blame on to him. So let's just leave it at that.

Yesterday, I was in town after a shoot, and I was supposed to meet a friend for drinks, but he had a fever. Long story short, I rang Skye to see if he were free for a cake and coffee. We hadn't met in the flesh since we split up. 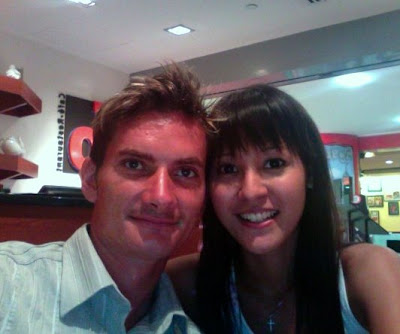 Picture: Skye and I at Wheelock. Nothing's changed, we both look the same as before. I had yummy cake called the G-spot. While he had some crappy tasting one... (he's always the unlucky one when it comes to cake choice and ice cream too for that matter)
He was at paragon shopping. When we walked past some expensive jewellery store ( I can't remember the name.. because I'm not brand savvy ok...) and I jokingly pointed to a HUGE and blinding heart shaped choker with like a shit load of sparkly diamonds and... I said "Buy Me?"

Which is just me joking around. (I am not some material girl expecting boys to buy her stuff ok!) The freaking thing was probably like 10 thousand bucks, anyway!

And I replied- "What are you talking about?! A year ago, we had already split up!"
[And actually thinking... yeah right... as if you would have bought that for me a year ago... REMEMBER THE SCRAP BOOK?????]


And it was then that it struck us... October 14 was the exact date of our break up, exactly 1 year ago.


How uncanny!
It was really nice to see him again. It's been one long and mostly lonely year for me. But for those who think that this is going to lead to some sort of rekindling of old flames. Sorry. It's not. When I made my mind up many many many months ago to put the pain behind and move on... I did just that.
Don't get me wrong. There's no hatred or resentment here. Just acceptance and realisation that that relationship is not what I want anymore.

Charlie said…
hey, will i able to put up some courage to meet up with my ex again in a year time? idk... let God lead my way
8:33 pm

Anonymous said…
So is the friend you are supposed to meet a potential lucky man?
11:49 pm

Anonymous said…
I do sense that you still have a thing for your ex...It's never "impossible" to get back together...Just got to work on it...
11:54 pm

Holly Jean said…
ol chang kee-- ah... i love your american humour. of course he paid for my cake! :)

Jolene- yes! i was supposed to meet a new date but he pushed it to the weekend. not sure if he's potential or not yet... have not had the chance to really know him.

anonymous 11:54, sorry but you're wrong. I do still care for my ex. But nope, no desire to get back with him. Haven't u noticed something abt me?? I don't pine after things! I'm a very full on, proactive person when it comes to r'ships...I'd just go out there and get it (or try) if I wanted it...

Anonymous said…
jean, can i say something... i think you should change the way you dress to attract better quality men in your life. I mean, not that you don't look hot right now in your clothes. A bit too much on the sexy side perhaps. Assholes loves sexy.

Dun get me wrong,I think you're one of the hottest bloggers on the face of the earth. Just that you seem to attract lousy stupid men. You deserve so much better!
6:03 am

hmm... well.. I don't think I attract lousy men.. I actually date a whole array of really great guys. I don't go out with the sleazy- just -for-fucks-kind. I'm looking to settle down with just one. So I've really got to be particular, hence it's taking me a long time to get the perfect one. Marriage is for life, I should not rush tht and go for the first can-do guy.

i don't dress sleazy do I ?:s shorts and tank tops are my staple clothes here in Sg, very comfortable. Most other time, I'm in baby doll smock or sun dresses.. hardly SEXY in the brute sense of the word.

Anonymous said…
Very sad this post! Made me think of some of the break-ups I've had too... and how i still meet up with my ex once in a while, and even though i know i don't want to go back to our time together, part of me still wonders if it could have been... sigh.

On another note, this was a very honest and real post - which is why I'm into your blog. Way to go, girl. :)

Anonymous said…
PS: Can i also ask that you disregard the post asking you to dress less sexily??!!!! Sheesh, myopic bugger.

Yes, let's all go around in habits, waving crosses and all - now that'd attract hoardes of men.

Maybe i exaggerate. But whoever wrote that is living in the era of anti-feminist ideals where women are still judged by conformolist notions of what they wear and not who they are.

If that was from a male, I wouldn't be surprised. If it was from a female, boo i say - shame on you.

Cathy C said…
For me, I think if we get back together with any of our ex-es, the feelings will never be the same again...It takes time to heal, but i think most woman,lady or girl, once they let go everything, it means gone forever..well, that's how I think..maybe it is just me =D
7:12 pm

I also had the same experiences and yet i still managed to be friends with my ex :)

sometimes people may wonder how come we still could be friends with our ex, but i think if we're truly could forgive and forget, we could rite?

i love reading your blog, and i think you are who you are so don't mind that who wrote to tell you to dress less sexy :D
5:16 am

Anonymous said…
I think Holly is just so naturally hot that she cannot help looking sexy in a habit and waving crosses. :P
I mean this as a compliment, cos I am not a lecher but a straight female. :D
1:46 pm

~Zhenna~ said…
I juz wrote inmy latest entry regarding break-up and the underlying reasons...well glad tt at least when u both meet again, there's no resentment coz after all, u have deeply loved him b4..btw, do u have friend called Felicia? I used to be her classmate mm and think saw u in mags too.. =)
8:31 pm