Girls Guide to the Grand Prix (Formula One)

on February 19, 2008
Other than the World Cup and the Olympic Games, which only take place every four years, more people (read: MEN) watch Formula One racing on television than any other sport. 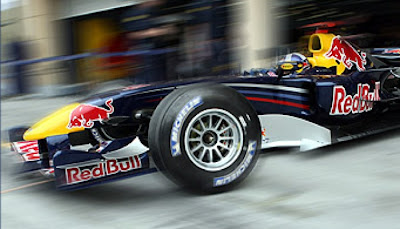 One of the 18 races this year will be held in Singapore (Sept 2008) and another in Malaysia (March 08). So I've been reading up on Formula One and I'm marvelled by the technology involved and the massive scale of the Grand Prix. The single seat Formula One racing car is the fastest, most technically sophisticated car designed to complete the 300km (!!!) distance that makes up a Formula One Grand Prix.
Why should boys have all the fun? So girls, let's get in on the action!
-----
Holly Jean's Girly Girl's Guide to The Grand Prix
The very least you should know is that the Formula One race is a weekend event. There are practice sessions on Friday, a practice session and qualifying on Saturday, and the race on Sunday.
18 races are held all over the world from the month of March to October( 8 months = 1 Season). In every race, the top 8 spots are given points. The winner receives 10 points, second place 8 points and so on...
The driver that earns the most points in a season earns the spot of the World Champion. Click the chart below to see the list of constructors (e.g. Ferrari, Red Bull, McLaren) and drivers (e.g. David Coulthard) . 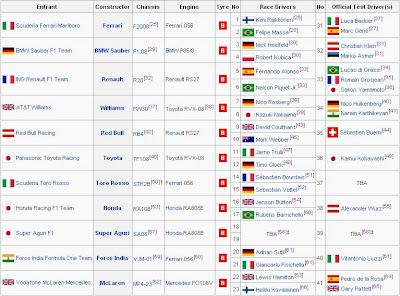 The Singapore GP is a street circuit and it will be the first race held at night. What is the difference between a street circuit and other tracks? Street circuits are tracks which incorporate closed public roads, normally in a city location (as opposed to racing in a purpose-made, permanent facility). There will be three “pure” street circuits on the 2008 F1 calendar, Monaco, Valencia in Spain and Singapore.
OK girls... now for a quick Glossary of F1 terms you will need to know.
Cockpit- The area of the car where the driver sits. F1 cars are single seaters. (I would kill to get to sit in one)
Paddock- An enclosed area behind the pits, where teams keep their trailers, trucks and motor homes (see pic). 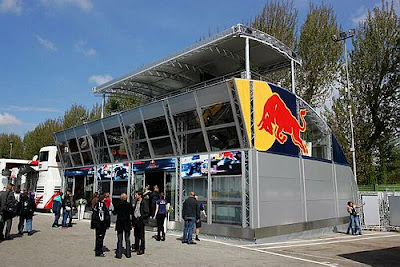 Pit board- A board held out on the pit wall by team members to inform a driver of his race position, the time interval to the car ahead or the one behind, plus the number of laps of the race remaining.
Pit stop- An area of track where the cars are brought in for maintenance. This includes tyre changes, and re-fuelling during the race. Each team has its own 'garage' area. (see pic) Splash and dash- A very quick pit stop, normally during the final laps of a race, when a driver makes a pit stop just to add a few litres of fuel to his car to make sure he can finish the race.
Downforce - The wings of Formula One cars travelling at high-speed produce this in huge quantities. It pushes the car into the ground and enables it to go round corners in defiance of normal gravitational laws. If run upside down at 100mph, an F1 car would stay on a ceiling!
FLAGS 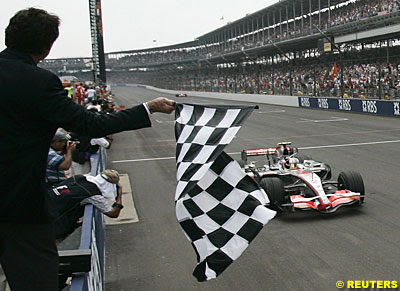 Black with orange circle flag- warns a driver that he has a mechanical problem and must return to his pit.
Blue flag -warns the driver that he is about to be lapped and to let the faster car overtake him. If a driver passes three blue flags, without complying, then the driver risks being penalised.
Yellow flag- Indicates danger, such as a stranded car or an accident ahead.
Green flag - All clear. When a driver has passed a danger point on the track.
Half black, half white flag - This flag, accompanied by a car number, warns of unsportsman-like conduct. It may be followed by a black flag, if the driver does not heed the warning.
Black flag- directs a driver to return to his pit as he has been excluded from the race.
Red flag- The race has been stopped. In most cases due to an accident or poor track conditions due to weather.
White flag - A white flag warns drivers of a slow moving vehicle on the track.
Chequered flag - A chequered flag indicates to the drivers that the race has ended 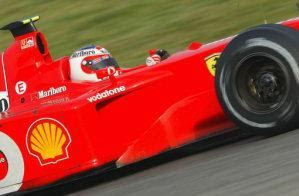 So that is it. Hope you understand Formula One a little better now.
It’s unpredictable, it’s exciting, it’s dangerous, it's sexy!
Don't you want to be part of it too?

Kutu Cat said…
Held at night? Spectators sit where? Can see anything or not?
2:12 pm