on December 26, 2007
My friend Tim is decorating his apartment. And he's hired interior designers to do it. My first thought was YUCKS! ( That shows how much faith I have in our Singapore designers with respect to their creativity and originality....) Can you blame me? What are they going to give you that isn't going to be practically the same thing they did in another client's house or worse still, just lifted out of the pages of a typical magazine anyway?

What I would really want is a skills man. Someone who will construct and install stuff for you to your specifications. ( But yeah Holly... you're all talk now... but when it's your own home, you might sing a different tune) :)

Well.. anyway... topic today... Feature Walls for the media/entertainment area. A feature wall is an area of your room that stands out. It can be done in bold colours and patterns, and does not make the room seem too over-powered. 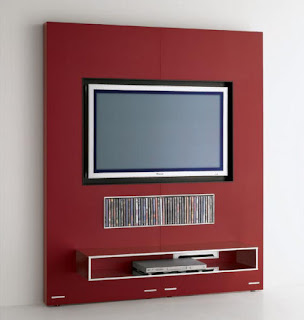 This is a common looking, run-of-the-mill feature wall... only choice you have to make is the colour and material.. do you want wood? or fabric ? What print? etc. yes, it is of a bold colour, it has neatslots for your Media stuff and it makes you feel like your home is really contemporary and all...But I don't like it. It is boring.

If you leave it to me.. I'd have a lot of pink in the room. But if I were to put my personal preferences aside, in a bloke's apartment, this would be my choice... 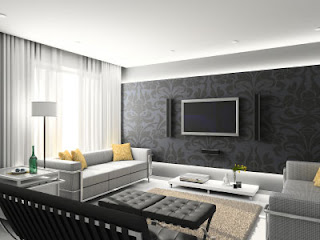 Look at the wall paper on this feature wall...It adds just the right amount of drama and class to a room. It's bold, it makes a statement... yet it's not loud and garish... perfect for the more subdued ( good accent for the people who like to paint the walls of their home White... ZZzzz).

This black embossed and partially glossy looking wall design looks ok in an otherwise very white room... but you have to keep the rest of the stuff/details in the room light otherwise it might be too dark and goth. [See Tim... even though you are a boy, you don't have to decorate your house with the colour of mud.]
And because the TV and longish speakers are all black anyway, they will blend in very nicely with the wall... I don't think it's a good idea to make the electrical equipment stand out in the feature wall... this is your home, it is not a store selling and showcasing the TV. I have seen that in a lot of feature walls... the contrast between the wall and the TV is so great that it looks as if the people sort of think of their plastic TV as an art piece on display... yucks. Please be reminded that there can be only one Andy Warhol.

Also note the false ceiling in this one. I love the way it hides the curtain rails, and allows for lighting at the sides. This black feature wall also does not stretch all the way up to the ceiling. There's a foot of the original white wall flanking the top and bottom of the feature wall. And between the feature wall and the original wall - there's faint light. Tadah! This not only lightens the heavy design.. but it also will bring more depth into a small room.

Improvements: Might be better to fit the tv and speakers into the feature wall rather than mount it on the outside. Also have small and minimal slots in the feature wall to accomodate the dvd player and other stuff... but make sure it's covered by a sliding panel of the same wallpaper as the whole feature wall... so the black embossed wall design has full continuity and all the ugly-shit-manly-designed equipment is hidden.