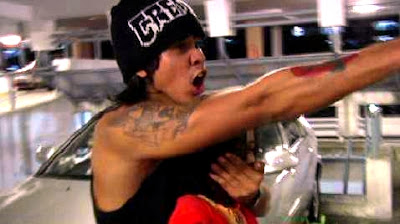 My Brother Wesley is in the Panasonic Digital Film Fiesta this year. He's the youngest contestant but I think this contest is a promising start for him. His short film is titled Flicker.

Do click the pic above in order to cast your vote. We need your support.

You can leave comments about the film here in my blog.

Basically it's about this young man who's left to care for his little sister. He's not well to do, neither is he particularly educated... but he is a good person at heart. However, due to circumstances in life, he has had to make some pretty tough and bad decisions. I won't tell you the rest.. watch the film and see if you can figure it out. Not an easy one to digest though. It's sort of a silent film, with narration. But the narration tells you one story and it's not in the same chronology as the visuals. You have to put two and two together in order to understand the whole film.

To see other films in the contest: http://www.digitalfilmfiesta.com/Video.htm

If the picture link above doesn't work: http://www.digitalfilmfiesta.com/Video_Flicker.htm