One thing I have to admit about Bangkok as a tourist destination is that there's always something to do. Twenty four- seven. From markets in the morning, day tours, river cruises and malls in the afternoon, bazaars, go-go bars and cabaret shows at night and cheap drinks and food all day long.
The sickening thing about it is- poverty combined with the lack of morals. There are people starving in India, poverty is much worse there than in Thailand. But we don't hear of people travelling to India for sleaze and sex, do we? Yet, Bangkok's sex industry is thriving (yes, I know it takes 2 to tango). And it's not something which only goes on at night in designated back alleys, away from the eyes of children. It seemed to me very much way of life there. We saw so many middle aged white men (OK, some younger, and some of other races, but mostly MUCH older, fatter and unattractive white men) with a Thai girl (not necessarily young & attractive) in tow. I found out that you can hire these women for the entire duration of your stay there. So it's like a tour guide and sex slave rolled into one. When I look at these men, I just think, can't you think of a more meaningful way to spend your hard-earned retirement money??? To each his own I guess.
Shit thing about it is - I'm Asian and my boyfriend is white. At first I was oblivious to the stares and discerning looks (from both locals and foreigners). But from the second day there onwards, after I had seen so many white men with Thai prostitutes, i realised that many people thought I was some cheap Thai hooker. Some white men look at me and I know they're thinking.. hmmm.. i wonder how much he had to pay for her. Almost all the Thais spoke to me in Thai when we were out shopping, thinking that I brought my young white sugardaddy there for them to fleece. By the fifth day, I was pretty pissed off with anyone who gave me a funny look. It was no longer amusing and very insulting. I hope that Skye and I can look back at this particular experience one day and laugh about it. On our second night in Bangkok (Skye's Birthday), we had dinner at Cabbages & Condoms. This is a condom themed restaurant at Sukumvit soi 12. I didn't make reservations so we had to wait for more than 30 mins at the bar before getting a table. I can't remember exactly what we had... I think it was tom yum soup, deep fried cotton fish, and a red curry(pork??), beers (plus beers at the bar too) and the bill came up to 1000Bahts. And instead of after-dinner mints, they give you ... CONDOMS. Novel idea. But we were given some normal looking made in America ones, I was expecting novelty condoms.

They don't tag a fixed service charge to your bill so you tip as you please. Service is OK there, everyone is friendly and understand English. Only a bit shitty about having to wait for the table, but I guess that was my fault anyway. And the waiting area-bar is nice... lots of comfy (and CLEAN) velvety couches, and they had a soccer match on TV.

Profit that this restaurant makes goes towards promoting safe sex and providing for people who have been affected by HIV. I am not sure what percentage of profits go to this, but I guess every bit counts. After dinner, we ventured about on foot, and after about a 10 minute walk, we came across Soi Cowboy. We walked the stretch and eventually walked back and into Long Guns. There were about 8 girls pole dancing in white outfits, and the place had UV lighting. It was packed. I felt uncomfortable. We didn't settle down, we just left.

It's a good thing that Skye's not one of those men there who just sit there watching and drinking. And I'm glad that he sensed my discomfort and got us out of there. I want to watch a Thai Girl show, something with tricks... you know, a real performance. Not a bunch of skimpily clad girls moving unenthusiastically on a stage with poles.

As we left Soi Cowboy, this lady boy (transvestite) went past us, and he-she brushed his hand on MY boyfriend's crotch. Skye had a bag in one hand, and my hand in the other, so he couldn't shield himself in time. Now, normally, I'd go ballistic because I don't share. Naturally. But in this instance, I couldn't help but laugh! And when I turned to look at he-she, he-she had another victim and I saw he-she deliberately stretch an arm out to grope another man's penis as he went past. Amusing, the things people do for kicks. 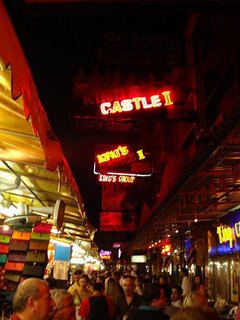 The next night, we ventured into Patpong. So many touts! You won't know who to trust. And I've heard so much about people going into a go-go bar for a few beers, having been told that there was no charge for the show etc, and in the end, when they try to leave, they're shown a ridiculous bill. And they are surrounded by big thuggish bouncers and have no choice but to pay. If you think this is bad, a few decades ago, some friends of my dad were asked to pay like US$2000 or else they would be injected with this syringe which allegedly had HIV contaminated blood. Could be just a scare tactic, but would you take that kind of chance?! Serves them right anyway for trying to get a cheap sleazy show while they have wives at home in Singapore! (I'm lucky my dad's a faithful family man)

(By the way... if you're given a bill tabbed with like 20 other drinks which you didn't order, just pay up, and as soon as you leave and are safe, call the tourist police at 1277, or was it 1255. Well.. one of those numbers will work! Anyway, I saw tourist police cars parked along the main road too. Didn't see them at Soi Cowboy though.)


We didn't go into any of the joints there that night, we just did the night market which runs along Patpong. But things there are way over priced (Like three times what the same items were selling for elsewhere), good thing we had already done Chatuchak and Platinum mall already, so we knew when they were trying to slaughter us.

On our final night in Bangkok (we were there 5 nights), after Muay Thai at Lumpinee Stadium, we had extra coin, so we decided to go for the Thai Girl show afterall. So we went back to Patpong.

One of the touts suggested we go into SUPER PUSSY, he said there was no cover charge and drinks were 100Baht each only. I already found this fishy as he was holding up a sign which said beer at 90Bahts. But hey... it's only a 10baht discrepancy.

He brought us upstairs into Super Pussy. There were 4 girls pole dancing, and one at the front part of the stage "performing". We sat down, the tout asked us for a tip. He dashed off straight after taking his tip. Alarm bells in my head should have rung then... but they didn't. And we ordered two beers.

When the bikini clad waitresses brought the beers, we were charged 600Baht. The tout had lied. And then more and more and more of them started coming around asking for 100Baht tips... They claimed it was for the "show", but we hadn't even seen anything yet, or even had a sip of our beer. If you're planning on going, prepare small change, and it is OK to refuse to tip them. If you do tip them, bear in mind this does not only happen once, and not to only one waitress/performer...

We kept seeing foreign men and the performers/waitresses adjourning into the restrooms together, only to emerge like 10 minutes later. I hope for the sake of their families and wives at home that they wore condoms. Fuckers. There was this one Indian tourist who kept groping this lady-boy ( I think he was too intoxicated to notice that it was not a real woman, or maybe he doesn't mind), and later they went into the restroom, and he came out like 2 minutes later... pity his girlfriend/wife/partner (plus he was ugly, and reeked of Loser).

Anyway... you can't take pictures in these joints. I think it's because if you actually videoed or photographed stuff that go on in there, no one would actually go there anymore. I think most of the men there would be ashamed if they were caught being there. And most of the girls were out of shape and with bushes, not what you would expect of girls who do sex shows for a living.

Different girls took turns to perform, each performance only lasts about 2 minutes, but it's some kind of relay system they have... so you don't have to wait for more than 2 minutes in between performances. The Famous Ping Pong ball stunt turned out to be just shit.. almost as non-impressive as the one where they pull out like 100 metres of ribbon from their cunt. What was cool was the one in which the girl used a blow pipe to shoot darts at balloons (not the round kind, the long kind, very phallic huh) about 3 meters away from her. Can be dangerous for the crowd, but I guess you can trust someone who's had to do this ten times a night for the last 5 years. I cringed at the razor blade one.

I understand why people and tourists go to such places out of curiosity, but I don't see it as something recreational. Even if it were men performing on stage. Speaking of men... there's a gay stretch of road close by as well. And we passed by this club (not along Patpong but close by) which had male performers, but they just swim around (and do water acrobatic stuff?) almost naked in huge Tanks of water. We didn't go to one of those though. Oh well. [In Singapore, there's supposed to be a club in Tanjong Pagar or something which has shirtless male waiters and male strippers?? But I've not been there nor heard much about it, can anyone update me? Would be interesting to blog about that]

Well... this Bangkok experience was an eye-opener for both of us.


P/s: The streets are really filthy. It's not somewhere you'd want to bring your Manolo's... heck.. you wouldn't even bring Pretty Fit there. Sneakers are vital, so are flip flops. I threw mine away instead of bringing them back to Singapore because they got really disgusting (changed from baby pink to sooty gray). I bought some nice new mickey mouse black ones for next to nothing there anyway :)

Pp/s: I think Skye would advise you NOT to go for a Thai Massage unless you want to be tortured. I was right beside him when he was being massaged, and he was just quiet, so I thought it was going OK. But he demonstrated it to me when we were back in the hotel room, and I swear... it is sheer hell, felt like my limbs were going to rip and my skin was about to tear, and that was only like a one minute demonstration. Plus he was doing it lightly to me. Go for an oil massage or a foot rub (like I did).

Ppp/s: When you're out shopping, look out for travel agents, they're cheaper than the Travel desk at the hotels. For instance, our Ayutthya day trip cost us 3000baht (for both of us) instead of the 3400baht the hotel travel desk quoted us.

Link back to Bangkok Post 1: land of pink taxis and cheap thrills