on December 03, 2006
[Loads of pics for this entry. Uploaded them as tiny pics so the screen won't take forever to load. Just click on the pics if you want a closer/clearer look] 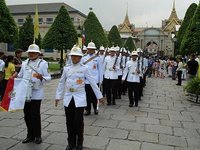 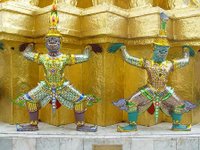 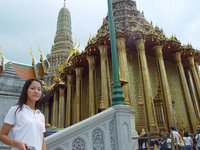 Entry into the Grand Palace and Grand Temple (both within the same grounds) is 250Baht per person. If you're Thai, you get in free (because it is a place of worship for them). If you want a guided tour, it's an extra 500Baht or so. Quite the rip off really, so we opted to venture out on our own. It's possible, no problems. Unless of course you want to hear stuff about the history of the place, then hire a guide to do the garble.

The place is Grand (yeah, Holly, no shit, I could have told you that) and what strikes me is not just the amount of gold on the walls, but the details. Intricate, painstakingly elaborate and fine. And we're talking whole building here, not just a detailed door knob or window. 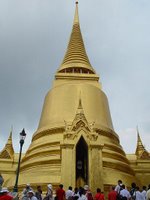 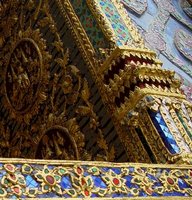 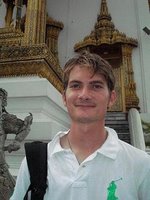 (Yet they can't clean their streets.) 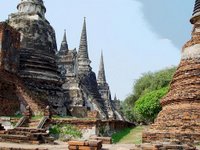 The ancient capital of Siam (Thailand), now in ruins.It's about 2 hours drive away from Bangkok. 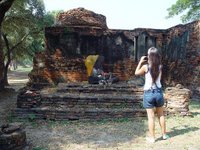 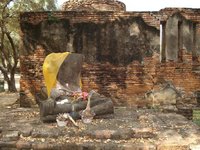 This was quite an interesting visit. I get a kick out of visiting ruins, makes me feel like an archaeologist. 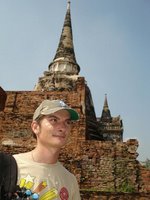 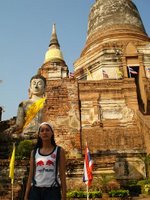 I didn't listen to our tour guide Audi cos his voice was so nasal. I don't think Skye paid any attention to him either, cos he referred to him as Audi the Cock. So I can't tell you why this ancient city was almost completely destroyed. Go look it up if you must know. 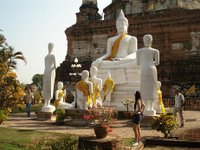 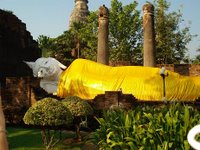 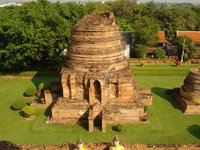 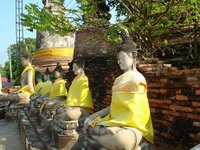 There's also a reason why some Buddha statues are unrealistically HUGE. It was supposed to scare some baddie giant or something like that. I'm predisposed not to buy into myth and believes like these. But it amazes me that the people put in so much effort and resource because of these believes.
Chao Praya River 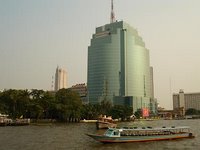 We went on the King's River Cruise down Chao Praya River. There was a buffet lunch on board which I was really looking forward to but that turned out to be crap. Lack of variety, lack of hygiene, over priced drinks. After lunch we went on the upper deck to take in the view. Nice to have the sun shining on you while you enjoy the breeze and sights. But the whole cruise was like 2 hours long, and all you really need is like half an hour of it. I got terribly bored. 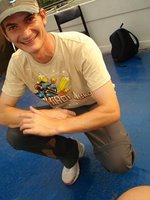 Fortunately for me, I chanced upon a swift-footed little Ukrainian boy who entertained me with his Russian Leg Dance. 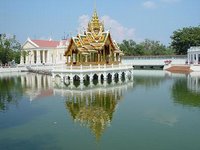 To me, this place was a waste of time. Nothing much to see really except more gold and glitter. The gardens were nice... but not nearly nice enough to warrant a whole trip there. 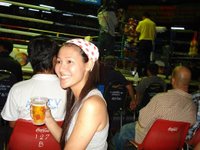 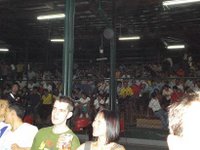 Muay Thai (Kick Boxing) at Lumpinee is a must see. Well, for me at least... cos I've never been to a boxing match. We had ringside seats which cost 2000Baht each. By Bangkok standards, that's pretty expensive. But when you look at the alternative: seating in the bleachers for 500Baht, with the locals who are there to gamble and possibly pick pockets (see back of 2nd pic)... the choice is obvious. Beers are only 50Baht but going to the toilet is scary. 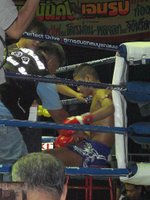 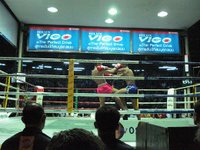 Skye was expecting blood and gore (and limbs snapping??!!) so he was quite disappointed we only saw one bleeder. I commend the fighters on their sportsmanship. Fair fights, humble winners, good losers. I've seen more aggression on football pitches. Overall, I was quite entertained.
...to be cond't
(In the final installment: Bangkok's Sleaze and Sex)