"The grass is always greener on the other side...

on November 15, 2006
... but once you get there, you realise the cows have SHAT there too"
(Prof. Lemuel Cheong CF, PhD. Philosophy, Harvard University)

What is it about us... the human species that causes us to keep having the urge to jump to greener pastures when we have already learnt time and time again... that once you get there... it's not all that green afterall.
"The males of most mammalian species have a definite urge towards seeking variety in their sexual partners. If a male rat is introduced to a female rat in a cage, a remarkably high copulation rate will be observed at first. Then, progressively, the male will tire of that particular female and, even though there is no apparent change in her receptivity, he eventually reaches a point where he has little apparent libido. However, if the original female is then removed and a fresh one supplied, the male is immediately restored to his former vigor and enthusiasm. "
(Glenn Wilson, The Great Sex Divide)
Which brings us The Coolidge Effect in which bulls have to be given multiple cows for mating. Which then brings me to the Old Cow- New Cow Theory, from my all time favourite author Laura Zigman. 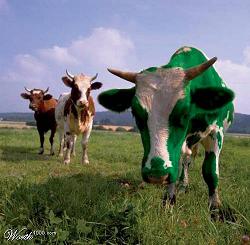 "New-Cow is short for New-Cow theory, which is short for Old-Cow-New-Cow theory, which, of course, is short for the sad, sorry truth that men leave women and never come back because all they really want is New Cow."
(Laura Zigman, Animal Husbandry)
Some time back, a male acquaintance of mine ( I'm not trying to be all confidential and secretive here... I just can't remember who it was!)...mentioned to me that in a marriage/relationship cheating is inevitable. Of course there are various degrees of cheating... not everyone who cheats has a mistress and kids in China or something. OK back to his point- Cheating is inevitable, it's just a matter of choosing to be ignorant about it or accepting it or sort of keeping one eye shut... and moving on with the relationship.
Even as I type this now, I am appalled by what he said. Though I do have a friend who cheats and has been in a relationship lasting 7 years.. and is still happily lasting now. While I on the other hand have had like 5 relationships fail on me. Is the key to forever after just as simple as acceptance &/or ignorance?
I was brought up in a home where promiscuity is more than just frowned upon and marriage is held sacred. Yet now when I'm out in the real world I see happy promiscuous people who are flirting and sleeping around... happy deluded people who seem oblivious to their partners cheating on them physically and/or emotionally. Happy relationships lasting way long than any of mine ever did. I must be doing something wrong.
Have you ever made the move to greener pastures? How's it like now?
Are you guilty of looking at/sourcing out for greener pastures? Why?
Have you had someone leave your pastures to go on to something that caught their fancy? I bet you're wishing that the greener pastures turned out to be full of cow shit. I know I would. In a heartbeat.

Anonymous said…
There is no Professor Lemuel Cheong CF, PhD. Philosophy, who works or graduatuated from Harvard University

Please delete this phallusy
12:52 am

Yes... that's because Lemuel Cheong CF is a good friend of mine came up with that quote and I mentioned his name as a prof of philosophy in jest.

You don't really think that a real professor of philosophy from Harvard would need to use the word SHAT (in upper caps as well!) in an academic scope... or do you?

This is not an academic thesis (in case you have not noticed)... it is my personal blog. I will give titles to whomever i deem fit.

By the way, anonymous, phallusy is spelt fallacy. Didn't they teach you that at Oxford?
10:24 am