Hey Nice Guys… Don’t let Jerks have all the fun with women! 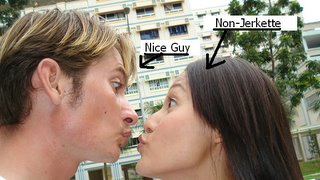 Let's face it... no woman really wants to be with a Jerk.

But in my past... I've been with a few of them (Willingly!). And I still see women around me with Jerk Husbands, Jerk BFs and Jerk dates. [Note to women: Give it up. No matter how much you feel that YOU are the one to finally change him... you're not... not permanently anyway. You can't fight Mother Nature (yes, that's the same broad which gave us the wonderful gift of passing mellon-headed human beings from between our legs)].

Girls, have you ever in your life just questioned... where have all the nice guys gone? I know I have... usually after bad dates with - MR Jerk who makes sleazy moves, or MR Jerk who doesn't call back the next day, Or MR Jerk who can't get it up and acts like it's your fault, or MR Jerk who leaves you to foot the bill again, or MR Jerk who actually has a girlfriend (or two!), or MR Jerk who is married with children, or MR Jerk with the roving eye... and the list goes on. You get the picture.

Let me share with you my mantra:
Everyone is worthy of commitment and happiness. Get out of a relationship which cannot make you happy. Guard all that you hold special and dear in you life, but never stoop to conquer.

Nice Guys. Help us out here. There are so many women out there worthy of you. You need to stop gravitating toward the female equivalents of MR Jerk... let's call them .. yes because I lack imagination... simply Jerkettes.